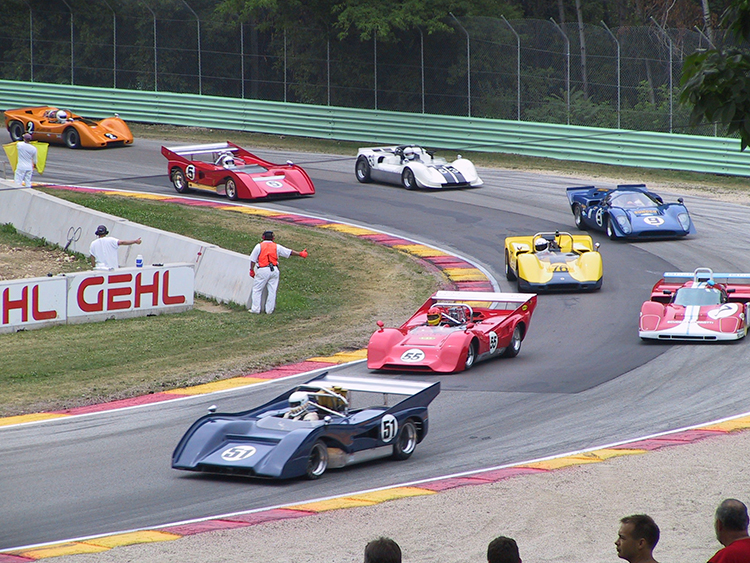 Recreate the spectacle of curvaceous cars with outrageous horsepower that was the 1966 to 1974 Canadian-American Racing Series.  A virtually unlimited race series, the cars had to have two seats and covered bodywork and that was the extent of the rules.  No limit on engines; no weight minimum.  It’s hard to imagine such a series in the rigidly controlled world of motorsports today.   Technology was pushed to the limit, as aerodynamics became more important; engine size and horsepower rose dramatically; tires got wider and wider (and some front wheels and tires got tiny).   Innovation abounded; some of it worked, some did not.   Basically run in the off season, the series attracted the best drivers in the world.

The vast majority of Can-Am cars were open roadsters but a few coupes did run in a limited number of races, including the Lola T70 coupe, Porsche 917, and at least one Ford GT40.  In the spirit of the original, the Austin Slot Car Club Can-Am series will also be open.  Since fantasy liveries are allowed, a car with, say, LeMans livery, would be allowed, as long as it was a model that ran in the Can-Am and is configured as raced there (not a long-tail version, different wing, etc.).   Modifications to an existing car, such as modifying a Ferrari P4 to make a 350P Spyder Can-Am car, will be allowed.

For a listing of eligible available slot cars, please see the attached file below.  This list is not complete but it does provide a good starting point.  There are some car models that will not be allowed.  These include all Thunderslot slot cars.  These cars are just too quick and members expressed concern that they would dominate the series, if allowed.  Out of scale slot cars will also be disallowed. Some slot cars are larger than 1/32 scale and will have an advantage.  We had this issue with some Racer cars a few years ago as they were more like 1/30 scale.  I don’t have any cars on this list at this time, but I would like everyone to let me know of what cars they will be racing or thinking of racing so I can check.  Minor variances from 1:1 sizing are OK.  For instance, the Carrera Porsche 917-30 is only 3% oversize, so it will be OK.

After much discussion about the eligibility of the Porsche 908/3, and thinking no Porsche 908/3 competed in the Can Am, Marty discovered evidence that, in fact, one raced at Watkins Glen in 1972.  As a result, the Porsche 908/3 is eligible to race in this Can Am series.

Most of the information about available slot cars was gathered from the usual on-line vendors or Ebay.  All of the cars listed started as least on Can-Am race.  In most cases I listed the car model as it was listed on the entry sheet.  Sometimes a car with a particular designation raced with different configurations or bodywork.  Cars evolved race to race.  Some cars may need additional work to replicate a car that ran in the Can-Am.   Also, some of the models listed are body kits and will need chassis.

In the spirit of the original “unlimited” Can-Am series, innovation and experimentation will be allowed.  If it is not specifically disallowed, consider it fair game.