Group GT3, known technically as Cup Grand Touring Cars and commonly referred to as simply GT3, is a set of regulations maintained by the Fédération Internationale de l’Automobile (FIA) for grand tourer racing cars designed for use in various auto racing series throughout the world. The GT3 category was initially created in 2005 by the SRO Group as a third rung in the ladder of grand touring motorsport, below the Group GT1 and Group GT2 categories which were utilized in the SRO’s FIA GT Championship, and launched its own series in 2006 called the FIA GT3 European Championship. Since then, Group GT3 has expanded to become the de facto category for many national and international grand touring series, although some series modify the ruleset from the FIA standard. By 2013, nearly 20 automobile manufacturers have built or been represented with GT3 machines.

Group GT3 allows for a wide variety of car types to be homologated with almost no limit on engine sizes and configurations or chassis construction or layout. GT3 cars must be based on mass production road car models that are being built and sold at the time of homologation. Performance of all the Group GT3 cars are regulated, either by the GT Bureau of the FIA or by a series’ specific ruling body, through Balance of Performance formulae that adjusts limits on horsepower, weight, engine management, and aerodynamics to prevent a single manufacturer from becoming dominant in the class. The cars in GT3 are designed to have a weight between 1200 kg and 1300 kg (2645 lbs and 2866 lbs) with horsepower between 500 hp and 600 hp. All cars have a very similar power to weight ratio but achieved either by high power and high weight such as the Mercedes-Benz SLS AMG[2] or low power and low weight such as the Porsche 911 GT3.  GT3 cars also have traction control, ABS, and built-in air jacks for quick pit stops.

Model list
If you want to run something I missed please let me know and I will add it to the list If it meets race rules. 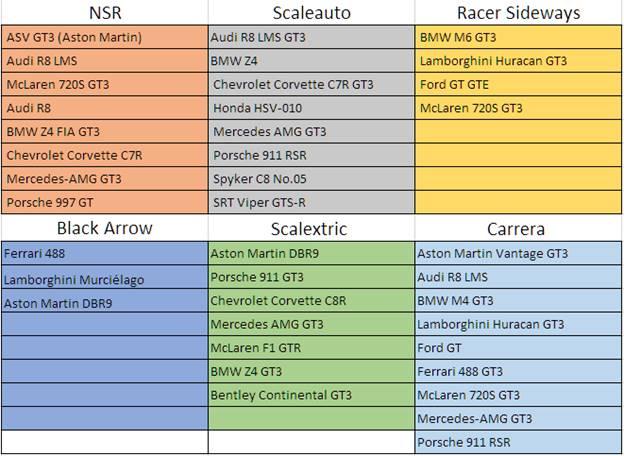