The first race series for 2015 will be the Scalextric  GT Lightning cars.  There are four cars available: 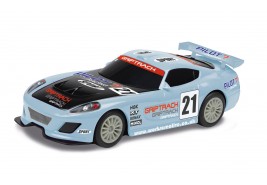 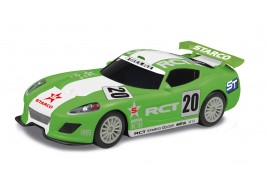 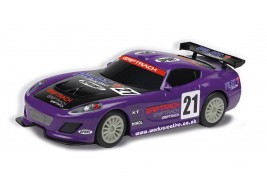 The cars sell for about $30.  I don’t believe King’s has these currently in stock but we will see that they get some.

The concept of the 2015 GT Lightning race series is somewhat different than the usual race series.  Normally, for any race series, one always strives to prepare the car to the limit of the rules.  Whether the series is open, allowing all sorts of leeway in parts and modifications, or more limited, with fewer changes allowed, one wants to tweak the car: with clearances, balances, friction, gears, and tires.

With the GT Lightning, the goal is to race the cars as out-of-the-box as possible, making a driver series with an absolute minimum of car prep.  Ideally, the chassis would not even be opened up.  Each driver will bring his car to the race and blind draws will determine what car he will actually drive that day.  The cars are very durable and I do not think there will be issues of a competitor breaking “your” car.  After the race each driver will take his own car home.

The series will race at 13 Volts, which will yield sub 4 sec. laps.  Cars will be raced absolutely stock.  Magnets will be retained.  No chassis/body trimming will be allowed.  The chassis will be screwed tight; no float.  There will probably be some tweaks to the rules as the series gets going.  We don’t plan on allowing tire truing; the magnets decrease the need for this, anyway.  We don’t know how fast the tires will wear; if necessary we may require car owners to replace them with the same tire.  Or, we may require everyone to replace tires at a certain point in the series.  Stock pickup braid should be maintained in good condition.