The third round of the Austin Slot Car Club’s NSR F1 race took place on Saturday, November 7th.  Nine racers came out to compete in what proved to be the fastest round of the series to date.

Just like every race, this one started with the series manager – David – performing the technical inspection of all the cars.  Most of the cars fell into a similar range of measurements with the exception of one.  Russell’s Kmart Lola Ford XB had an amazing downforce level of 125 grams as measured on the Magnet Marshall.  To put this in perspective – most of the other cars were around 70 grams of downforce.  It would be interesting to see if this added magnetic downforce would help Russell capture a podium spot. 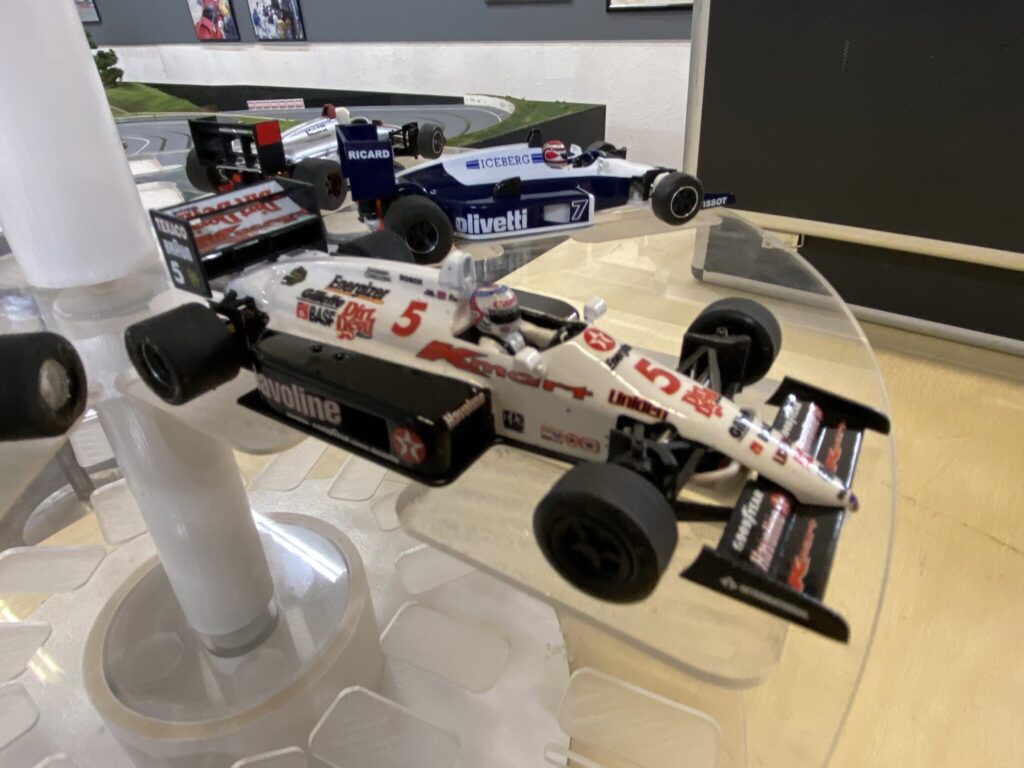 Due to some adverse wear issues with the NSR crown gears that were discovered early in testing the rules allowed for the use of Slot.it crowns and pinions.  Even with this option most of the cars were using the NSR crown gears and pinions.  Some competitors took the added step of removing the end of the motor shaft and running axle stoppers.  This was done to reduce any possible friction by alleviating any contact between the shaft and the crown gear. 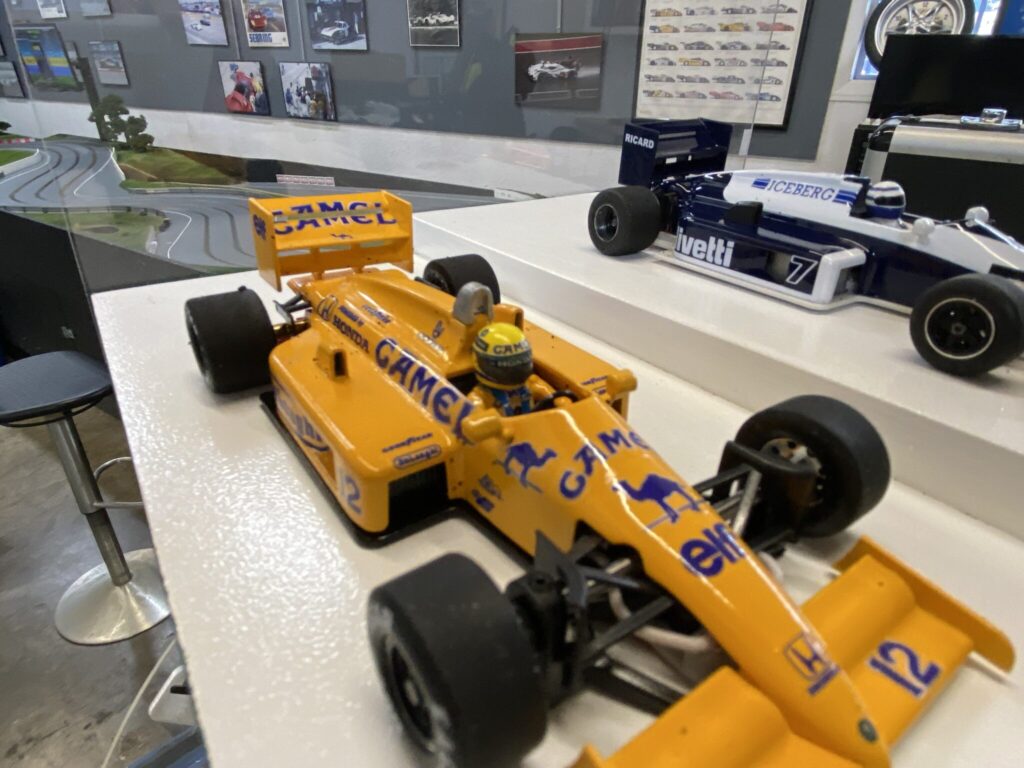 This would also be the first race of the three to run under the new maximum width of 68mm for the front and rear wheel track.  It was discovered after the last round that some of the cars were running a slightly wider track than stock.  The rules stated you could use axle spacers but did not specify which ones or a maximum track so some cars were as much as 4mm wider than the others for the first two rounds of the series. 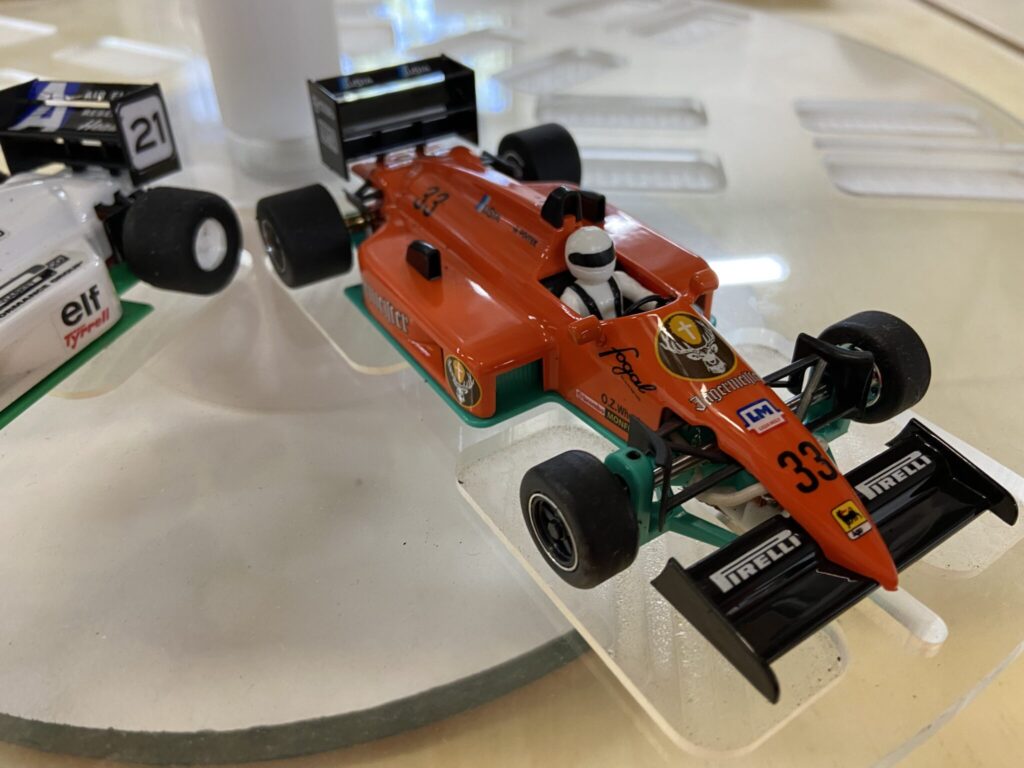 Most of the competitors were also using the new NSR deep wood guide #4859 in place of the stock guide.  Having said that, the stock guide works well on our track but who’s to say a deeper and longer guide would not perform better.  Isn’t bigger always better?

The other common change to the cars is the use of a stiffer chassis.  The majority of cars were using either NSR’s green super-stiff chassis or the white stiff chassis.  The club’s track is very smooth and requires very little chassis flex or suspension movement. 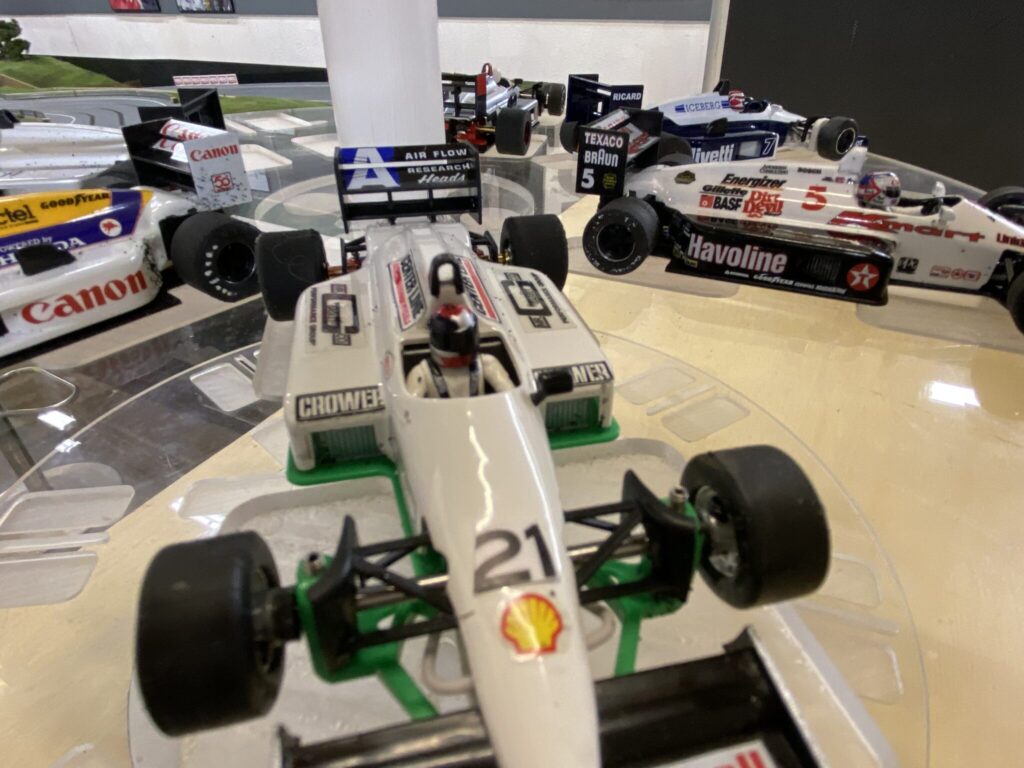 The other notable change to the cars was the use of the smaller 16×8 NSR front tires part #5290.  These tires give the cars a lower stance at the front and fit on the front wheels much better than the stock tires.  These are definitely worth upgrading if your club’s rules allow them. 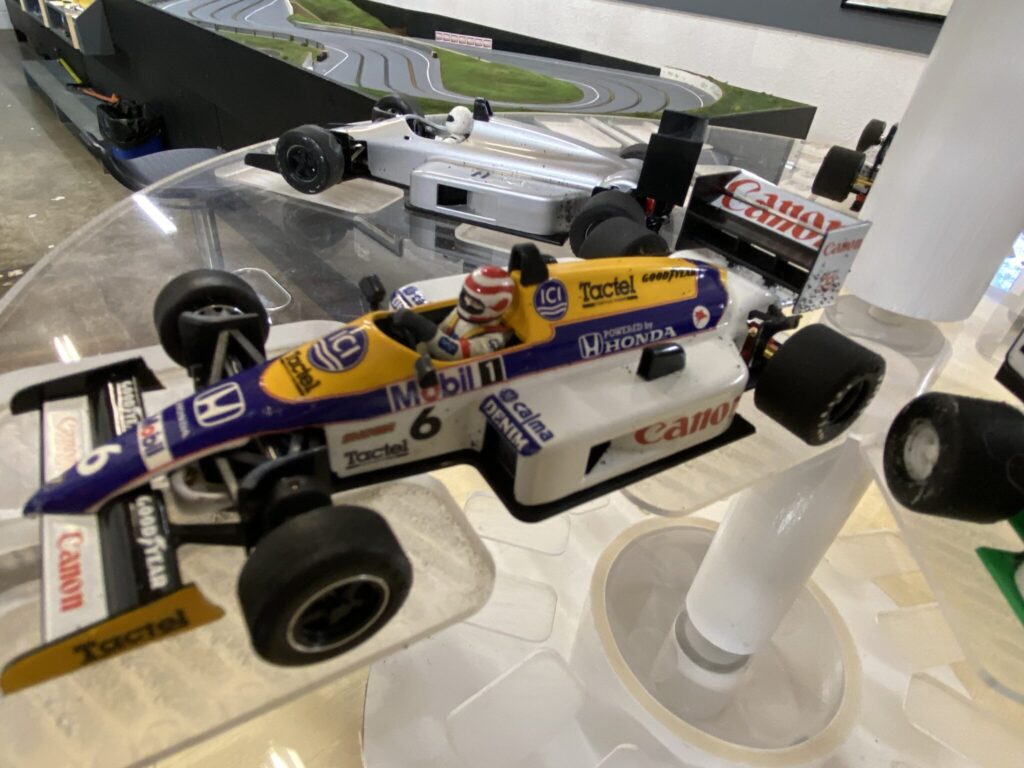 The final change to many of the cars had nothing to do with performance but everything to do with appearance – the detail work on the car aesthetics.  This involved some amazing work with paint and decals as well as the drivers, their helmets, and the cockpits of the cars.  It was great to see the members putting in the extra work to make the cars look as good as they run. 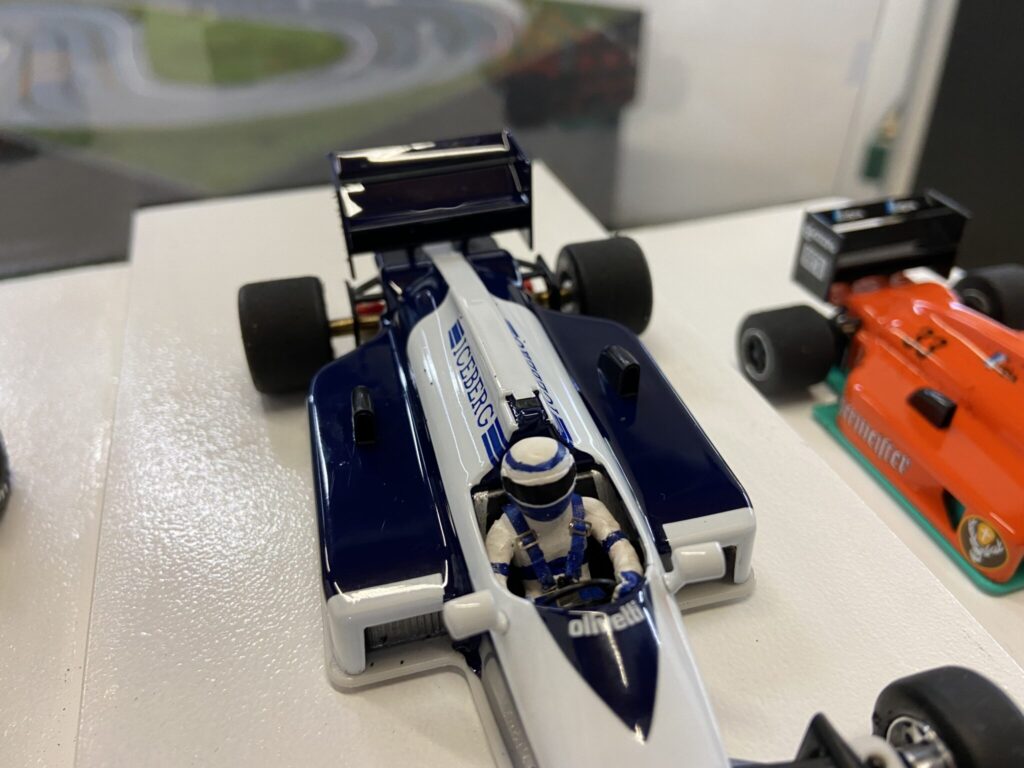 The other thing of note was the absence of the two Ferrari cars from the last two rounds.  It looks like both racers that ran Ferrari’s were now running Brabham cars.  I wonder why they both decided to make the change.  Let’s see if the Brabham cars were able to run quicker than the Ferrari’s they replaced.

The pre-race warm-up showed that many of the competitors were getting better at setting up their NSR F1 cars as well as learning how to drive these quick cars.  The braking points and the application of power is so very different in these cars than most of the other cars the club runs that you have to rethink how to drive these cars.

The track temperature and low humidity were perfect for the 13mm wide NSR SuperGrip tires and the increased grip in these conditions would surely result in some super fast times.

The races started quickly with Marty’s Brabham and David’s Jagermeister car setting the pace in the first heat.  Marty set a fast lap time of 3.593 to David’s 3.688.  Marty’s time was the quickest in the series so far but the day had just started.

The third heat was highlighted by Marty’s Brabham touching wheels with Marc’s Williams and taking an epic tumble to the concrete floor.  The drop pushed the rear bushings out of the motor pod and made the tires super dirty.  After some time cleaning the tires and re-installing the rear axle bushings the car was back on the track.  It was not as consistent but it was super fast and managed to set the fast lap of 3.588 – the fastest in the series so far.

The sixth heat was witness to one of the craziest de-slots ever seen at the club.  At the 2:48 mark of the five-minute heat Randy’s Mercedes slides coming out of the final turn on the green lane and goes from a slide to the tire hooking up and flipping the car.  A flipping car is not all that unusual but a car that flips and lands back in the same lane has never happened before.  It’s worth watching the eight-second video.

The final heat saw some close racing between Ary and David to determine the second and third places on the podium.  It was a fun heat but unfortunately, David had a couple of de-slots that made all the difference.  Ary was perfect as usual and stayed in the slot and locked up second place.  I don’t know if Ary’s performance was all him.  He just might have been channeling the spirit from his stunning and thoughtful Ayrton Senna shrine. 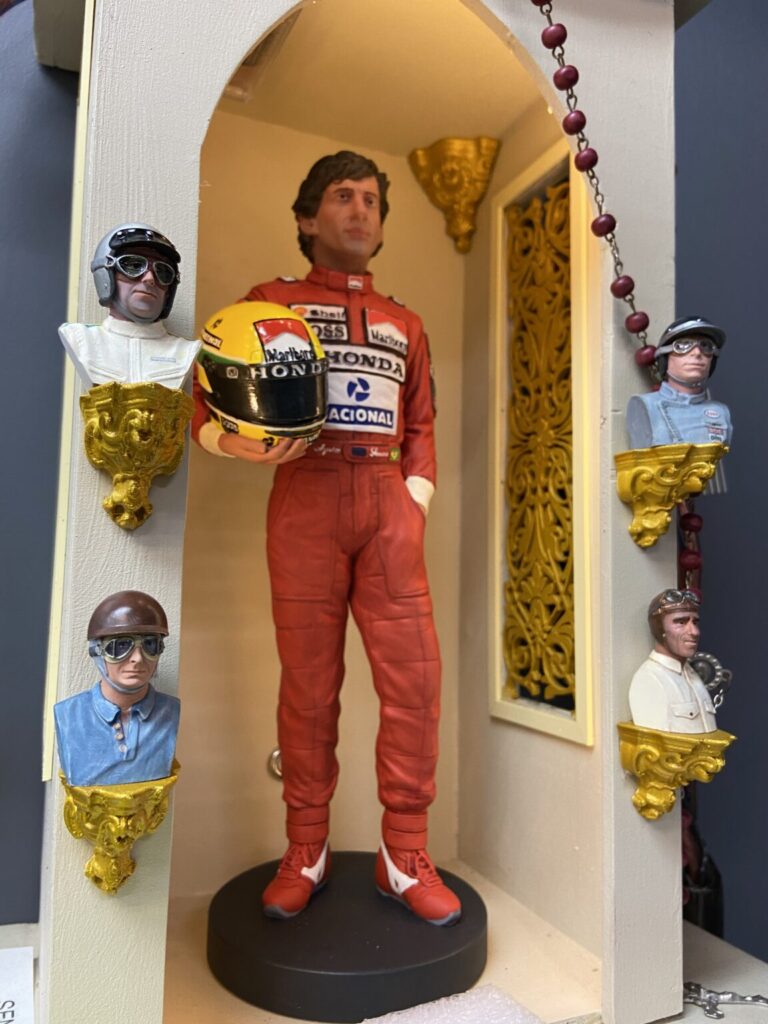 The final results of the race see the overall totals get closer and make the final three rounds important for anyone that wants to make a run for a final podium spot.

I can’t wait to see the next round on Saturday the 13th at 1:30pm.  Be sure you check out the live coverage on the club’s YouTube channel.  You never know what great race you might see. 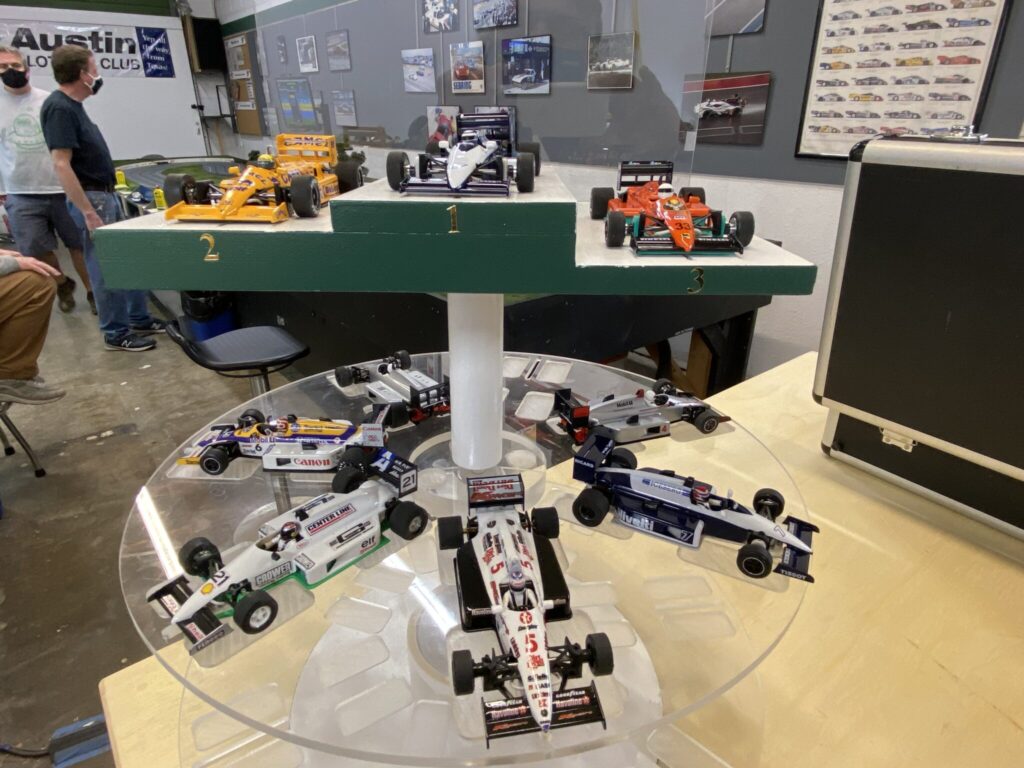 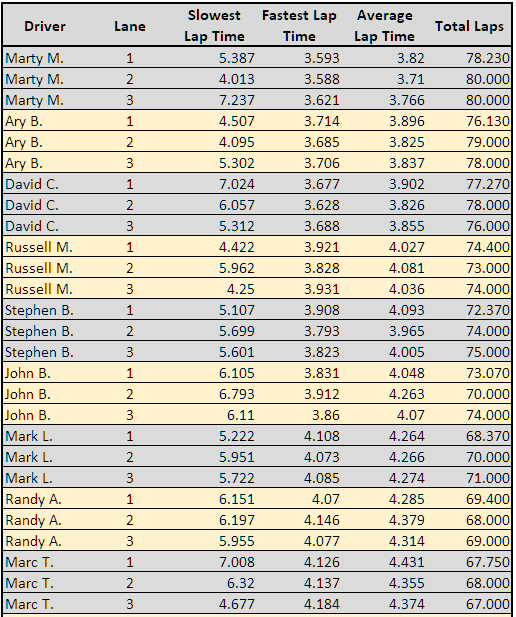 Randy did a barrell roll!!!