The first round of the club’s annual Slot.it Group C race series was held this past Saturday the 7th of January. This series is always a club favorite and has been running as long as the club has been around, in fact, it was the first series the club ran back in 2010. With such a great history everyone was looking forward to running the series for its 13th year in a row. 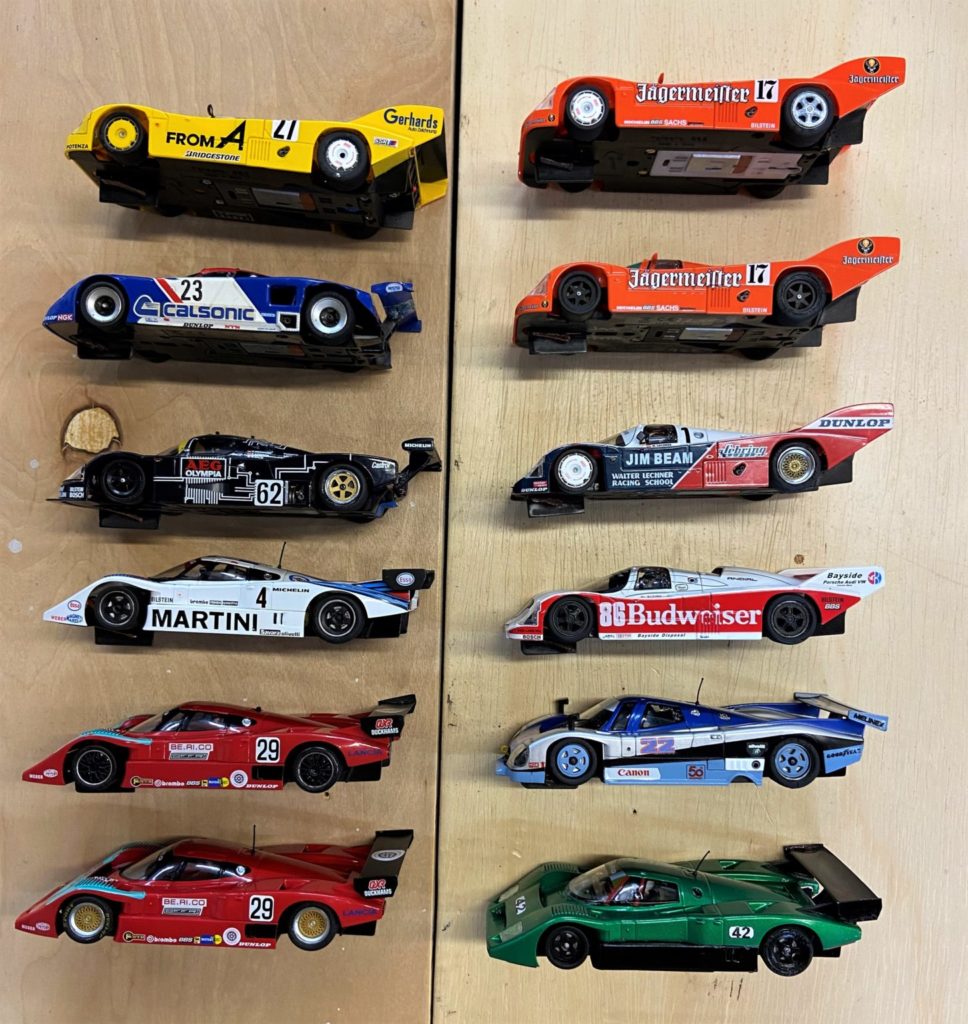 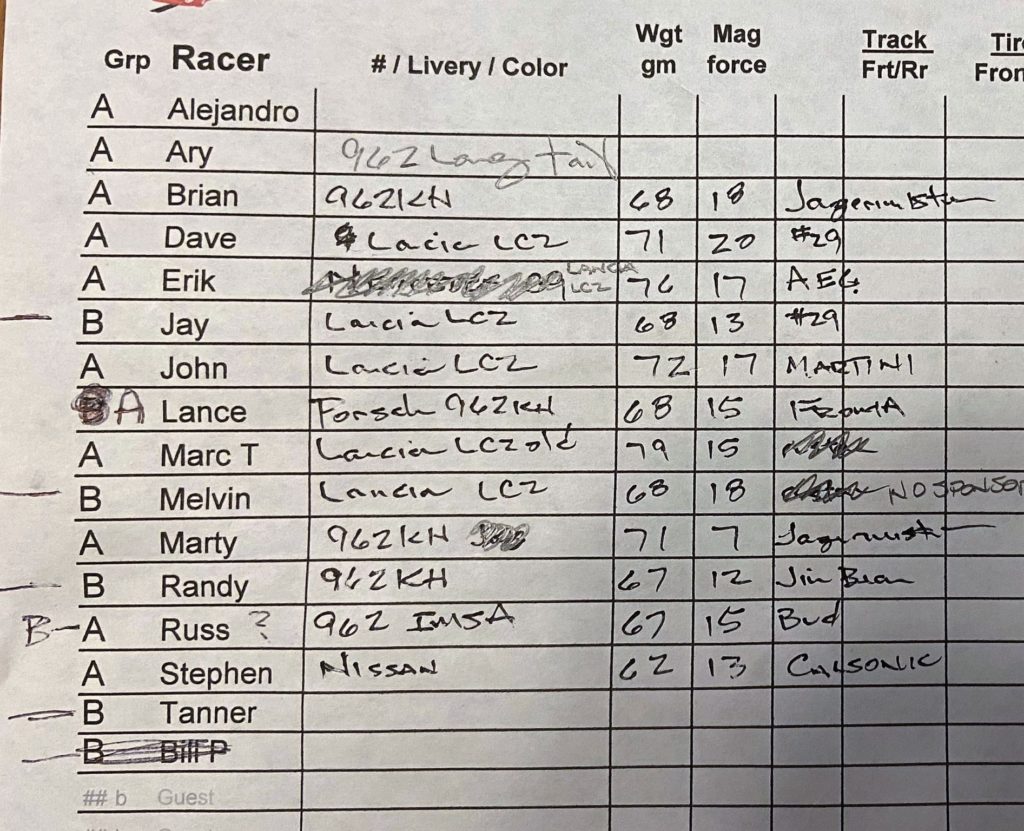 The club had 12 members present to run the series with a good mix of long-time members along with some great new members running their first series with the club. It was great to have the headquarters full of activity and the accompanying energy. 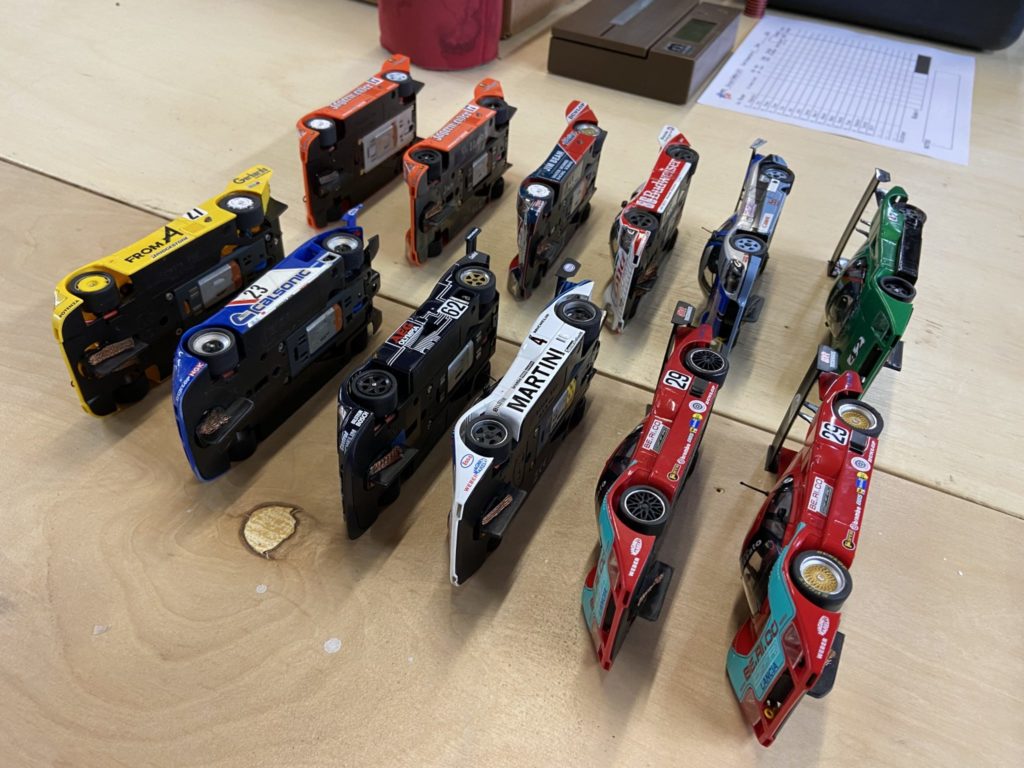 A change for all of our 2023 race series will be the reinstatement of two race groups – the more experience and quicker racers in the “A” group and the newer racers in the “B” group. Both groups will run together but the results will be posted separately for each group. This will allow new members to compete in their own group with other new members. 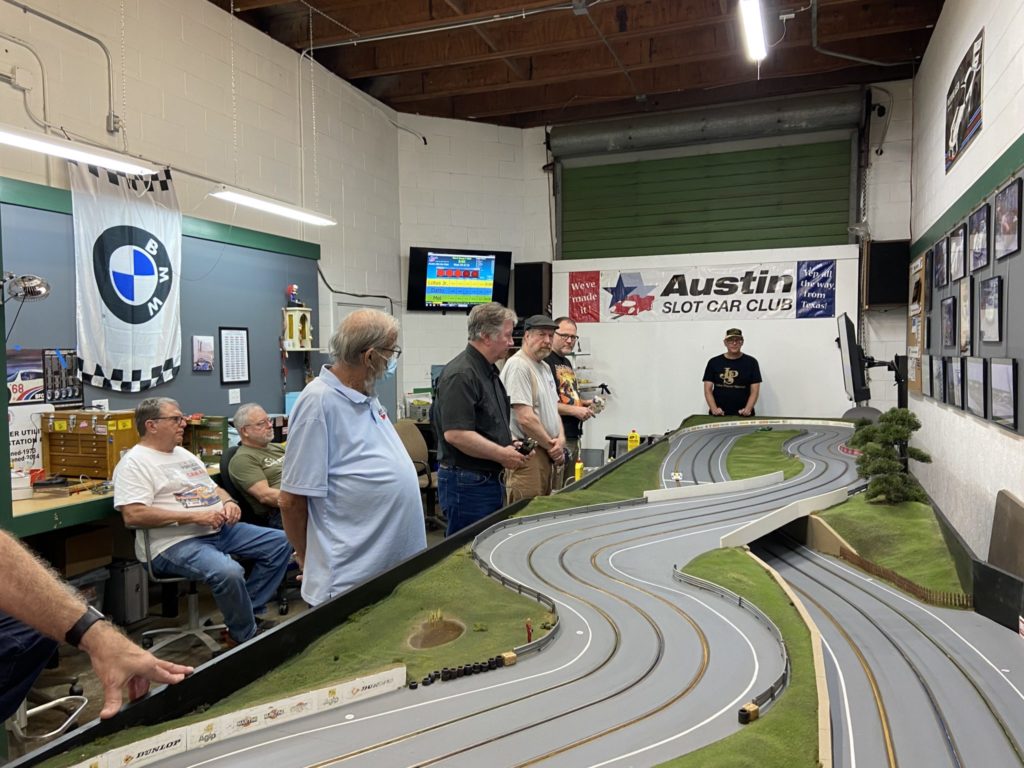 The mix of cars running in this round was not nearly as diverse as most of the racers have seen that a fixed wing car like the Porsche 956/962 and the Lancia LC2 work best on our track. There were two racers who decided to go against the trend with one running a Mercedes C9 and the other running a Nissan R89C. 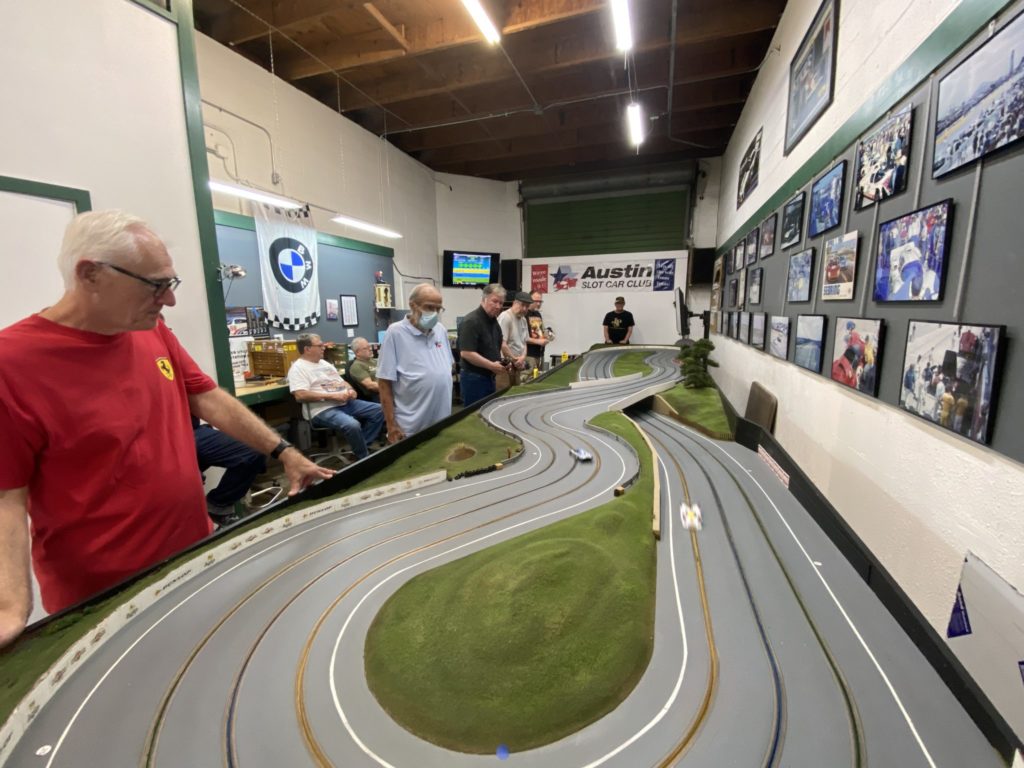 The weather was uncharacteristically warm for an early January day with the ambient temp at 75 degrees, humidity at 70%, and the track temp at 70 degrees. The higher than normal temps could play a role in determining outcome as tire choice and track temp are all part of the perfect car set up. Let’s see how it went for the 12 racers. 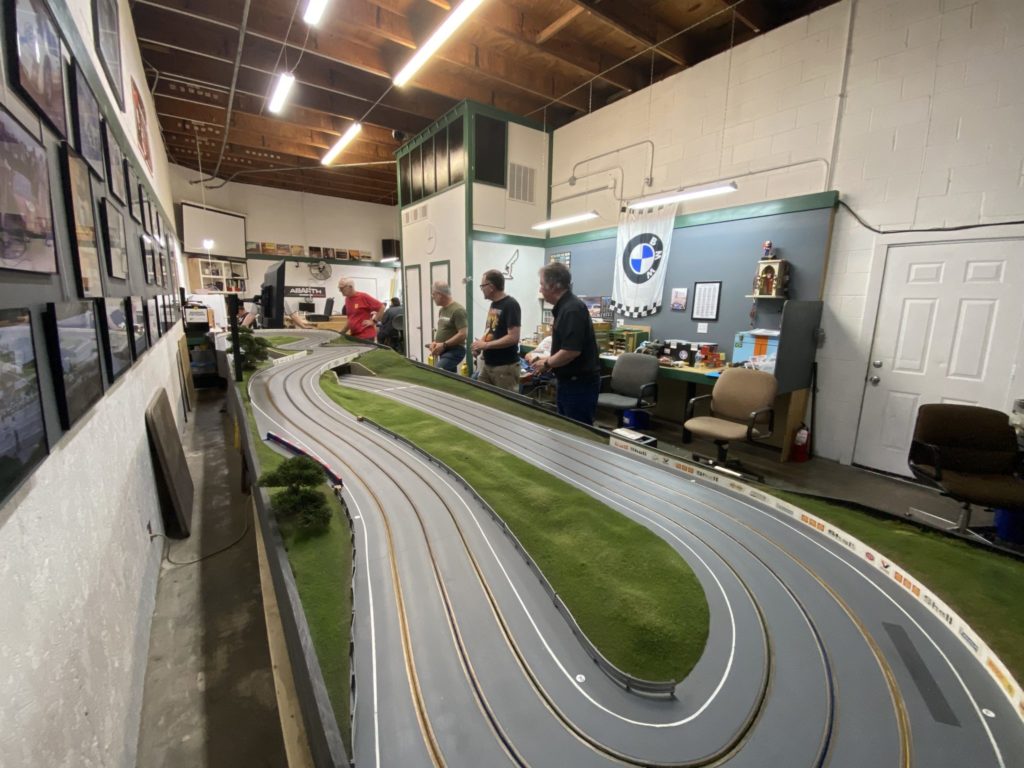 The clubs tire of choice for most of the year is the tried and true and now unavailable Slot.it F30. These tires work great on our tracks semi-abrasive surface providing the best and most reliable handling. All that being said, in the colder conditions the F30 is too hard and does not have the grip of a N22 or F22. The new wrinkle this year is the addition of NSR Supergrip and Ultragrip tires. It will be interesting to see who runs what and how these warmer than usual temps will impact the results. 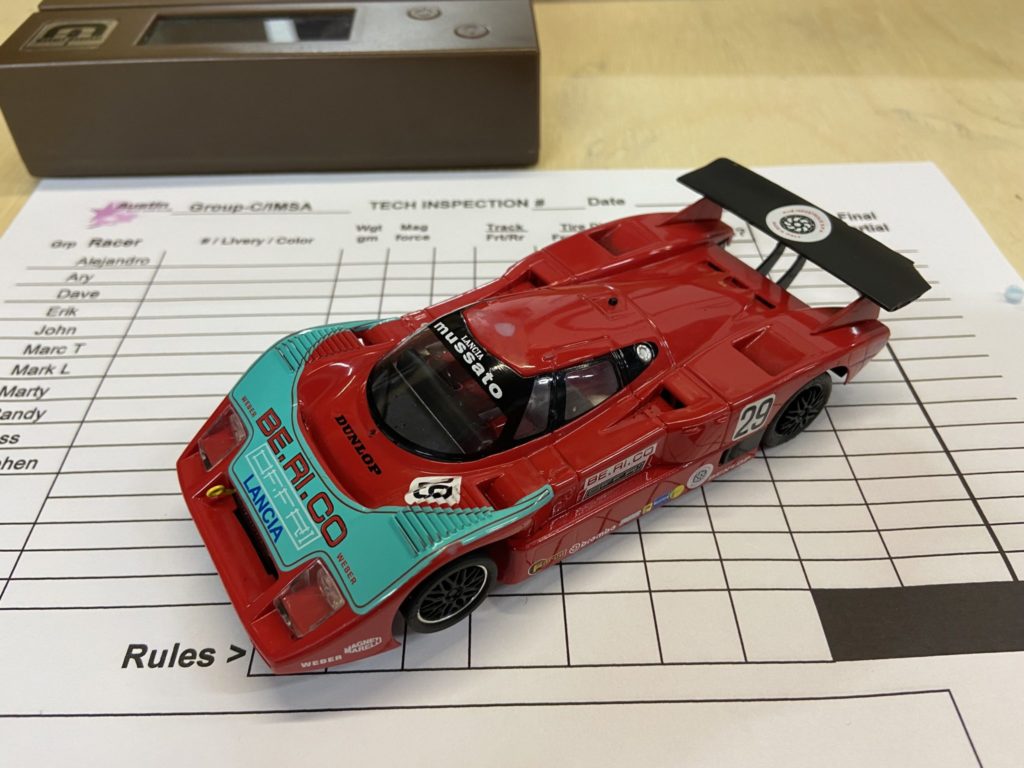 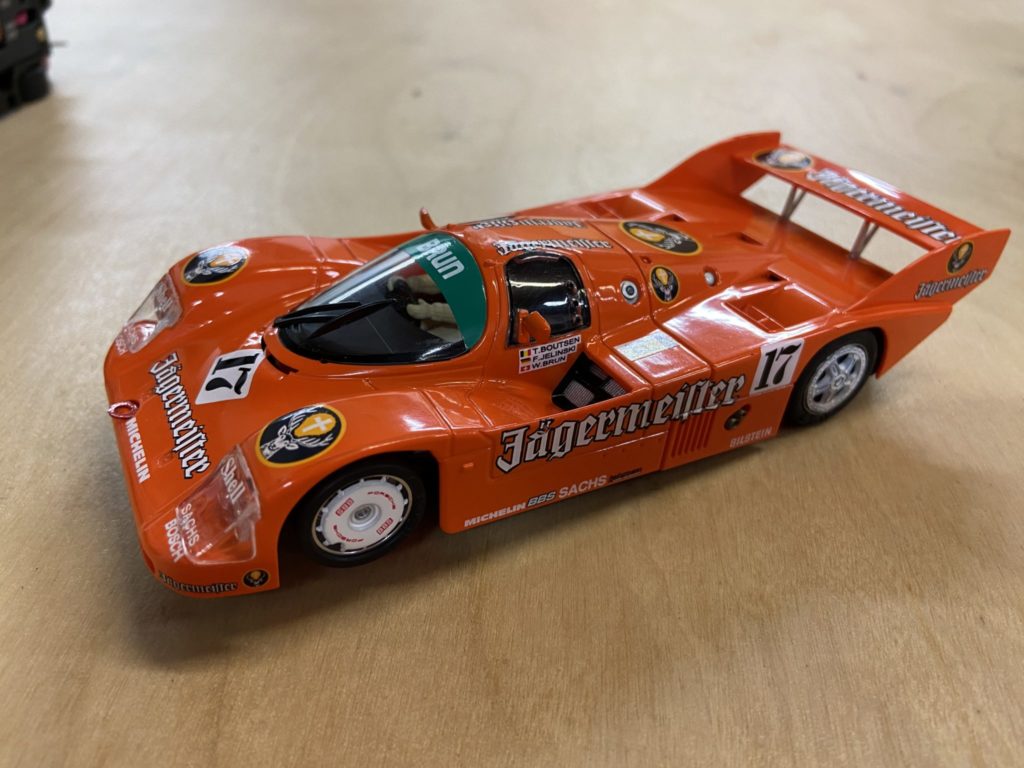 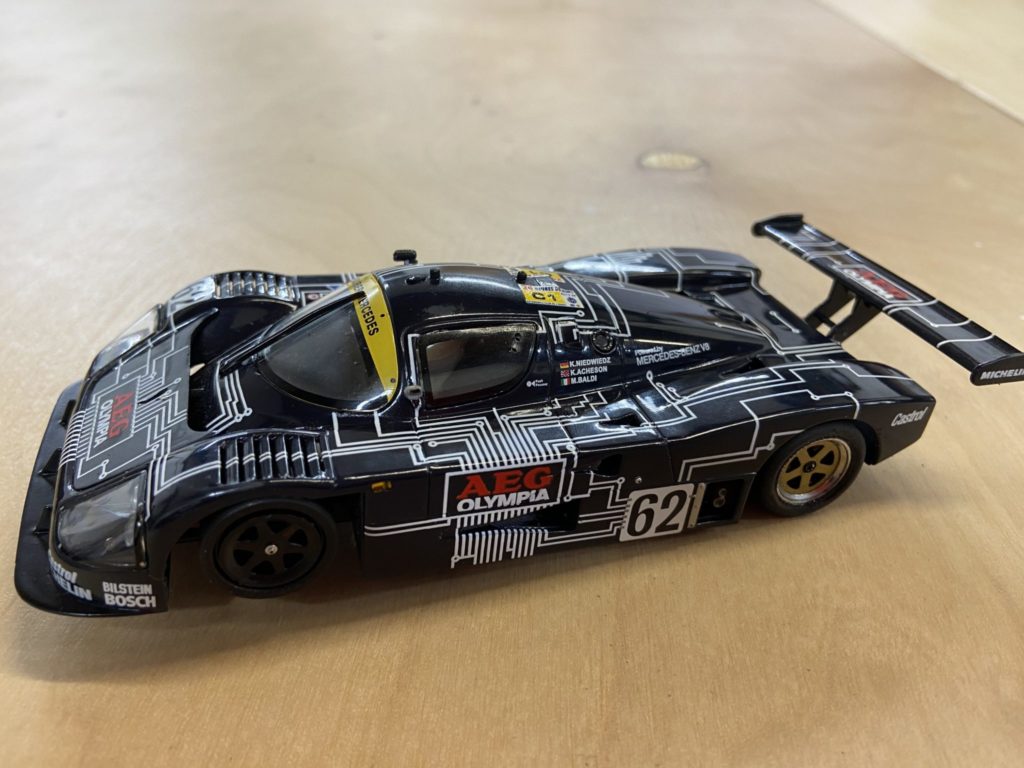 Round 2 had Marty joining Erik and David. Marty was running his orange Jagermeister 962KH. Marty was pushing but could not keep pace with David’s Lancia. Marty ended up running 74 laps compared to David’s 76. Marty’s fast lap was 3.809-still not as fast as David’s. Erik had a better heat running 70 laps with an improved fast lap of 4.138. 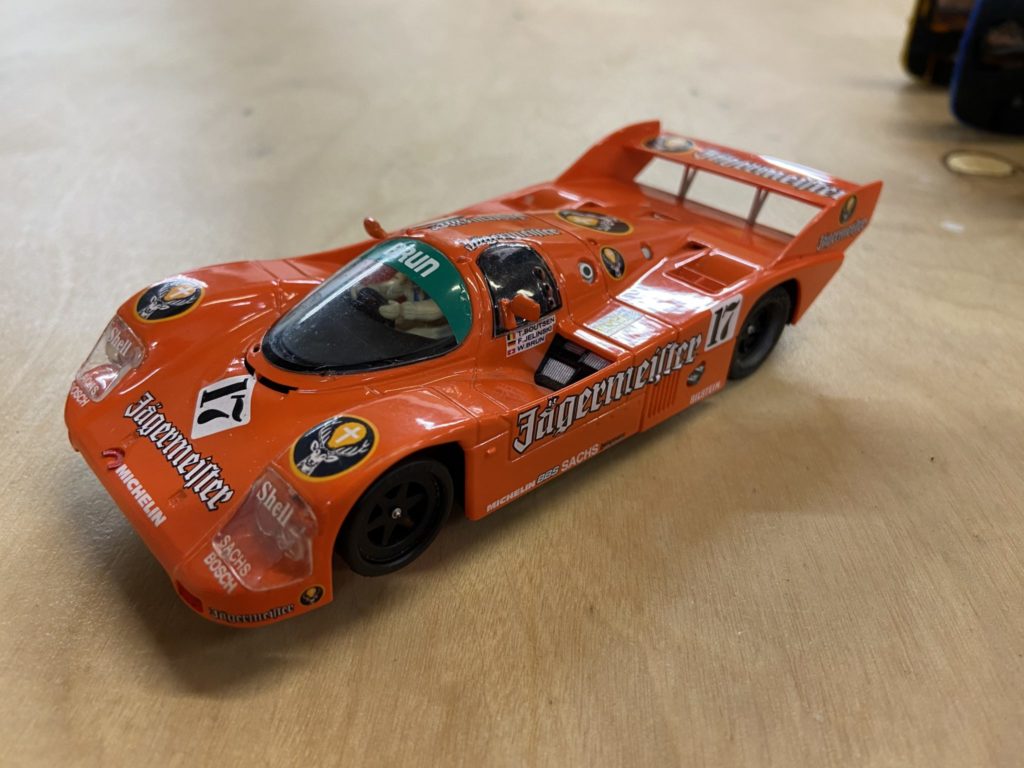 Round 3 had new club member Jay join Marty and David. Jay was running a Lancia LC2. Jay ran 61 laps in his very first time running the Slot.it Group C series. Well done Jay. Jay’s fast lap for the heat was 4.451. Marty ran 75 laps but more importantly set the new fastest lap time with a 3.749 lap. David continued to be quick and ran 77 laps and his fastest lap of 3.804. David finished his three heats with an untouchable total of 229.47. Well done David. 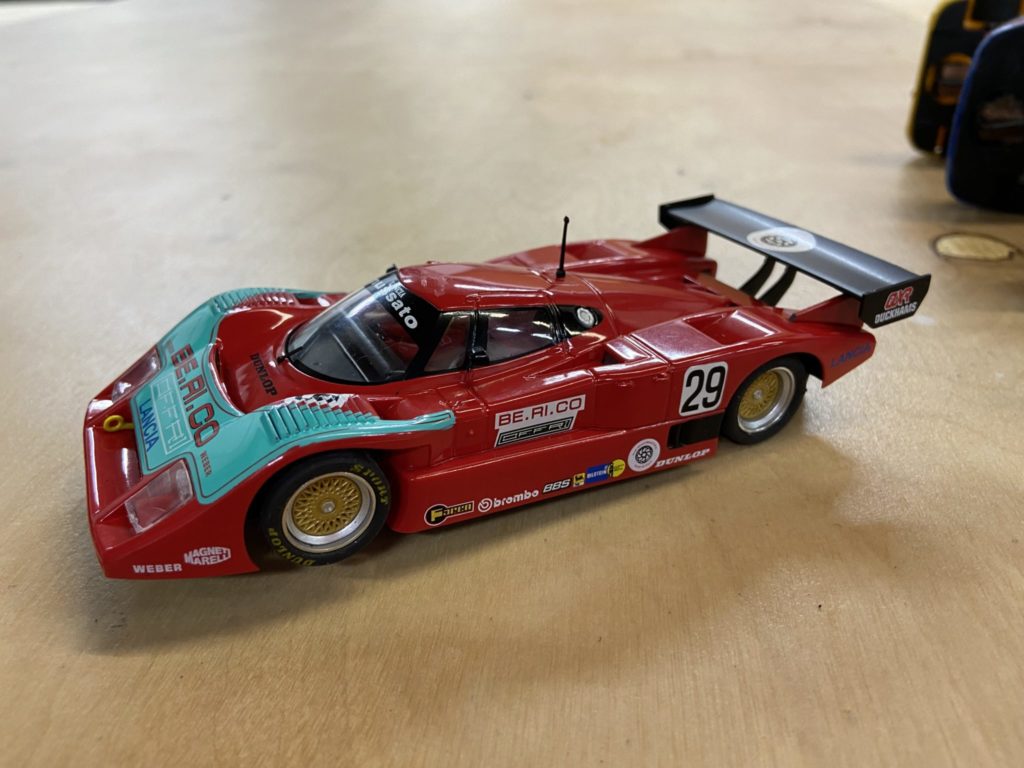 Round 4 had Steve join the race with his tried and true Nissan R89C. Steve’s Nissan is the same one he has run in the past 4? Group C series. The Nissan has a cracked chassis that he has repaired but I’m sure it does nothing to help the handling of his car. Steve ran 68 laps with a fast lap of 4.039. Jay ran 61 laps and improved his fast lap with a time of 4.437. Marty ran 75 laps but did not improve his fast lap time. Marty finished the three heats with a total of 224.30 and the fastest lap…….so far. Marty also noticed that his one year old Slot.it F30 tires were starting to come apart. This could explain the lack of pace in the final heat. Tires are so key to success in this series. It will be interesting to see what he runs in the next round. 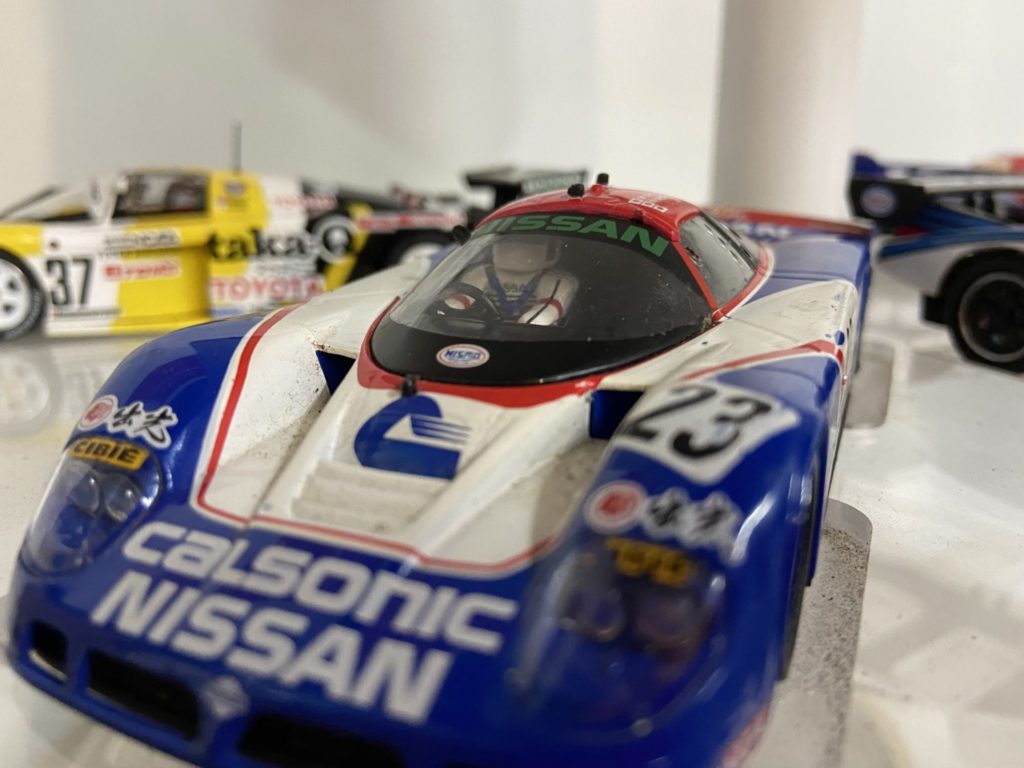 Round 5 had Lance join in running his new Porsche 962KH in the From A livery. Lance has run with the club years ago before he moved to Hawaii. He has returned and will be running with the club for 2023. Lance was super quick and managed 74 laps and a fast lap time of 3.874. Well done Lance. Steve ran 67 laps with his best lap time of 3.955. Jay ran 63 laps and set his fastest time with a 4.263 and finished his three heats with a total of 185.10 laps. That is a great run for his first time running the car or the series. 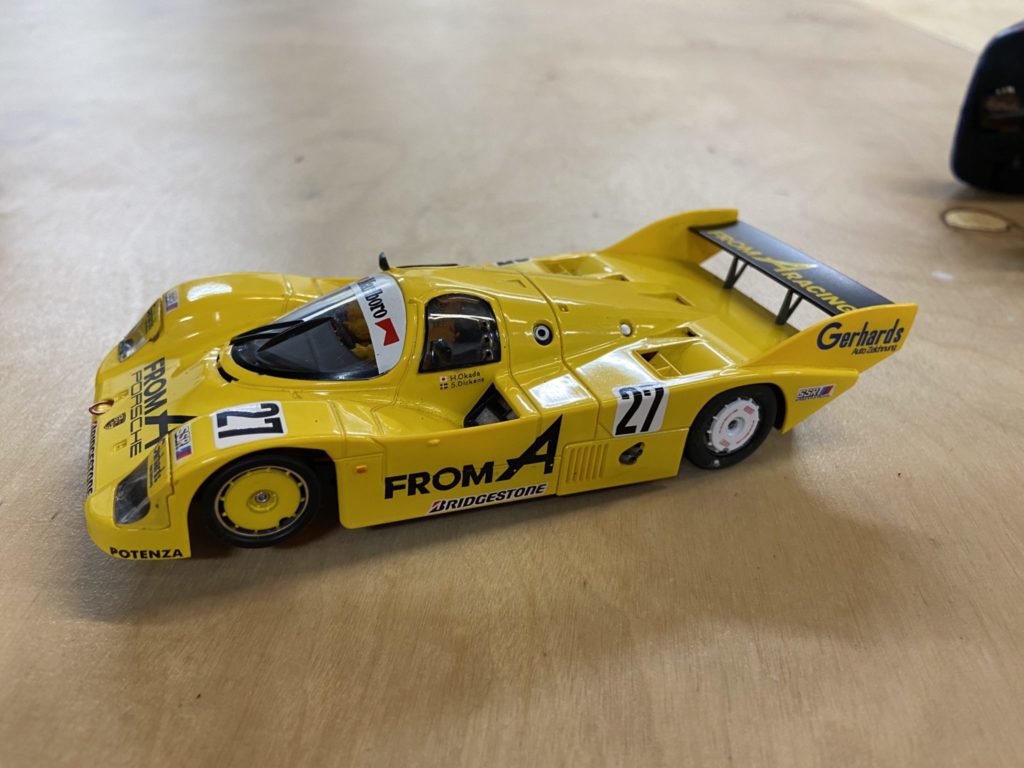 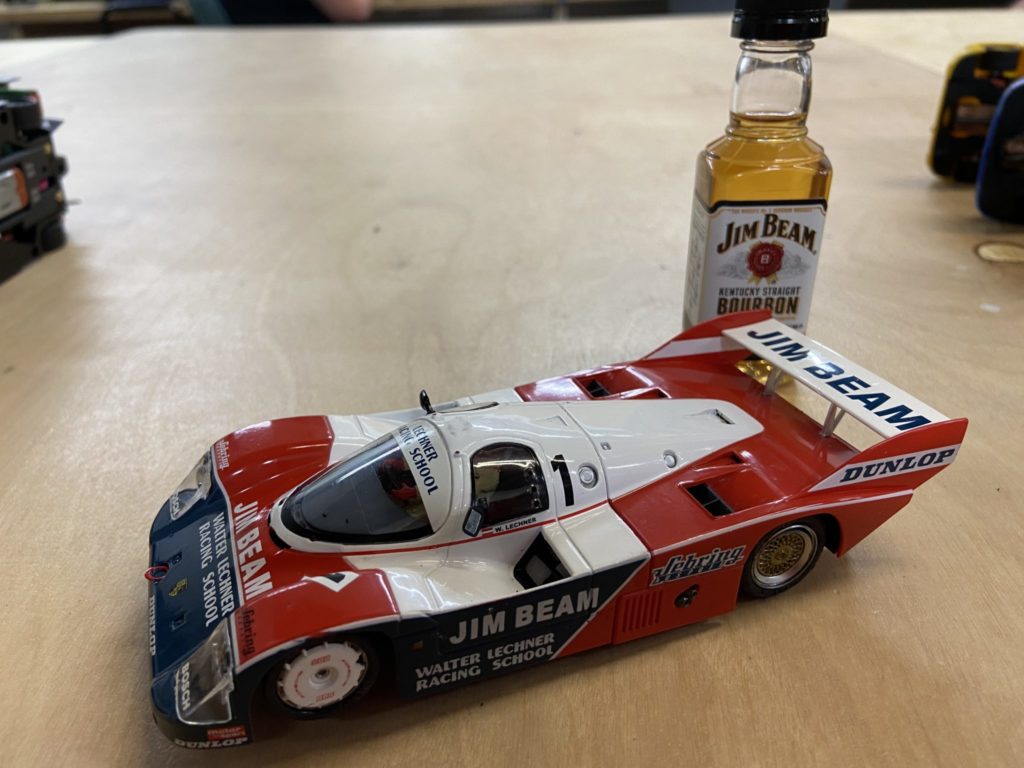 Round 7 had Russell begin his race. Russell was running his tried and true IMSA Porsche 962 in the Budweiser livery. Russell managed 67.33 laps with a fast lap of 4.092. Randy ran 66 laps with a new fast lap for him of 4.182. Lance ran 73 laps in his final round and finished with a three heat total of 222.47. Amazing run Lance. 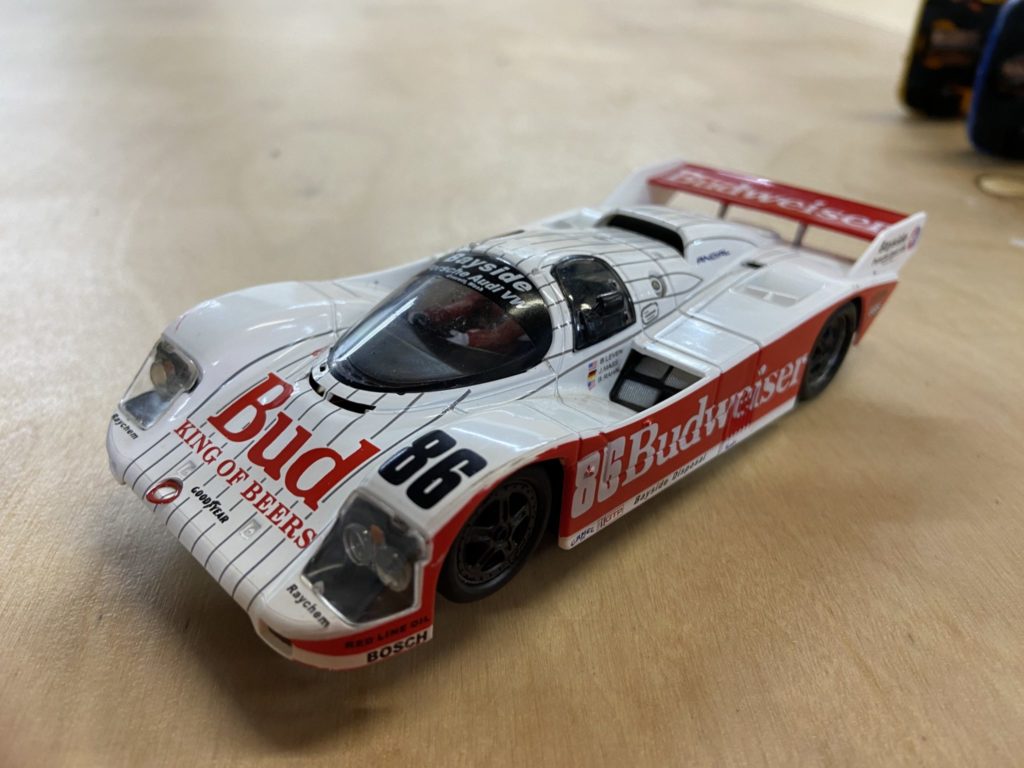 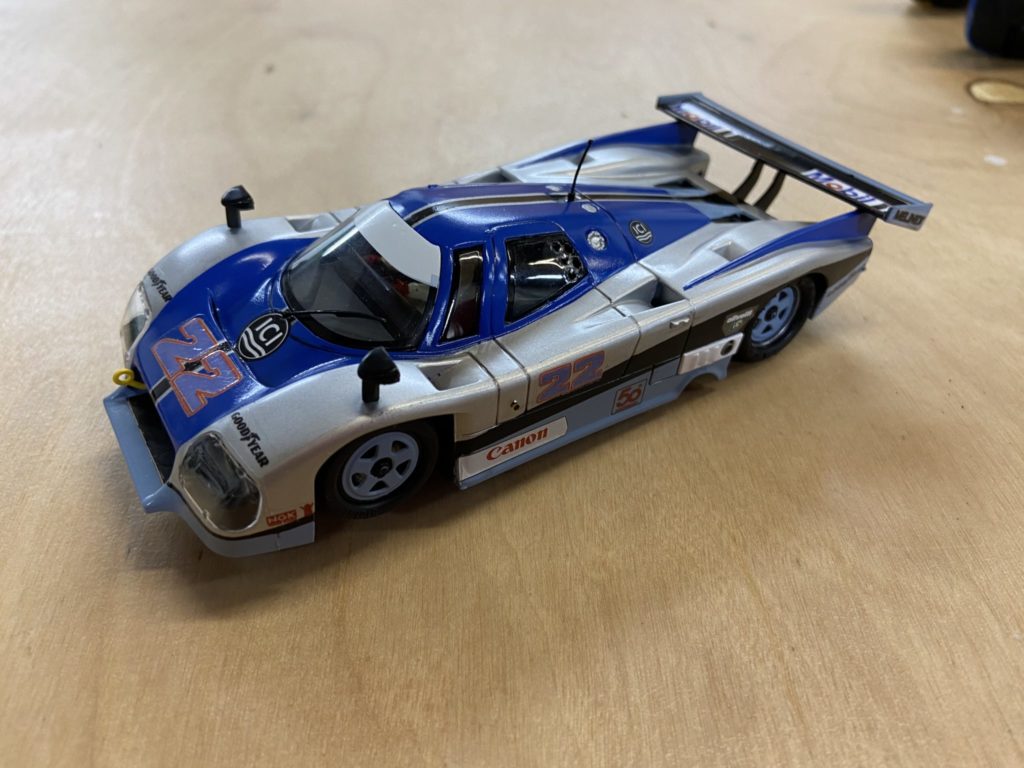 Round 9 had new club member Melvin join the series. Melvin was running his custom painted green Lancia LC2. Melvin managed to run 54 laps for his first ever outing with a fast lap of 4.536. The best part of watching Melvin run was how smooth he was and how he stayed in control the whole time. Well done Melvin. Marc ran 68 laps and did not manage to improve his fast lap time. Russell’s third heat had him run 69 laps with a new fast lap for him of 4.07. Russell finished the three heats with a total of 204.33 laps. 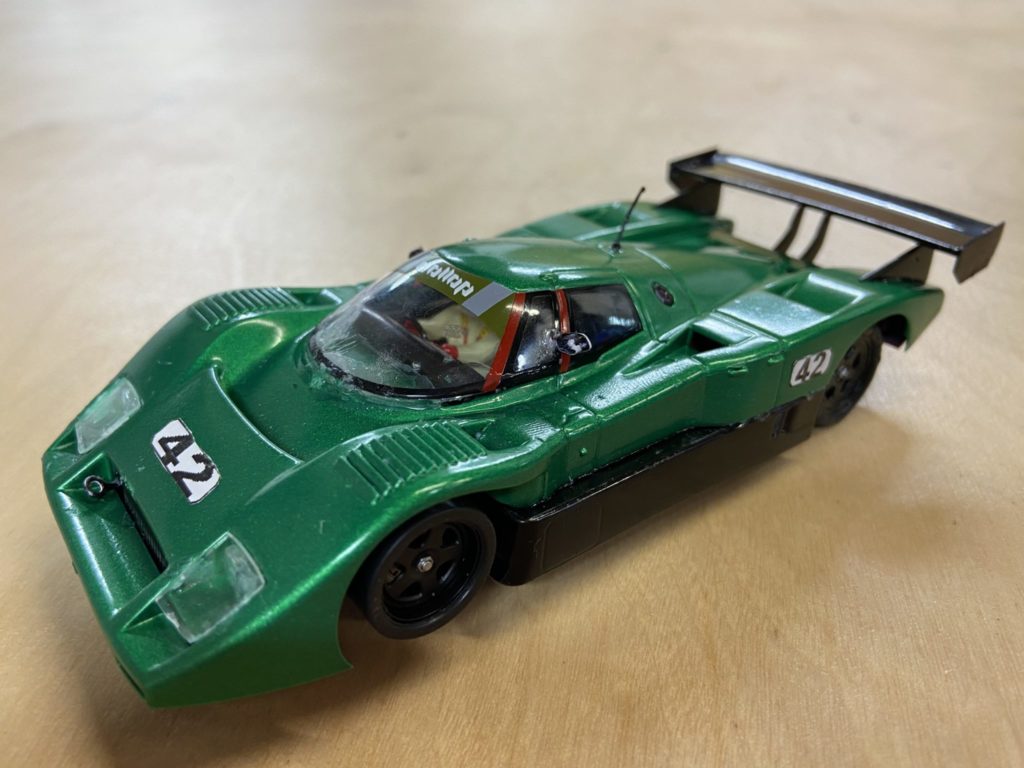 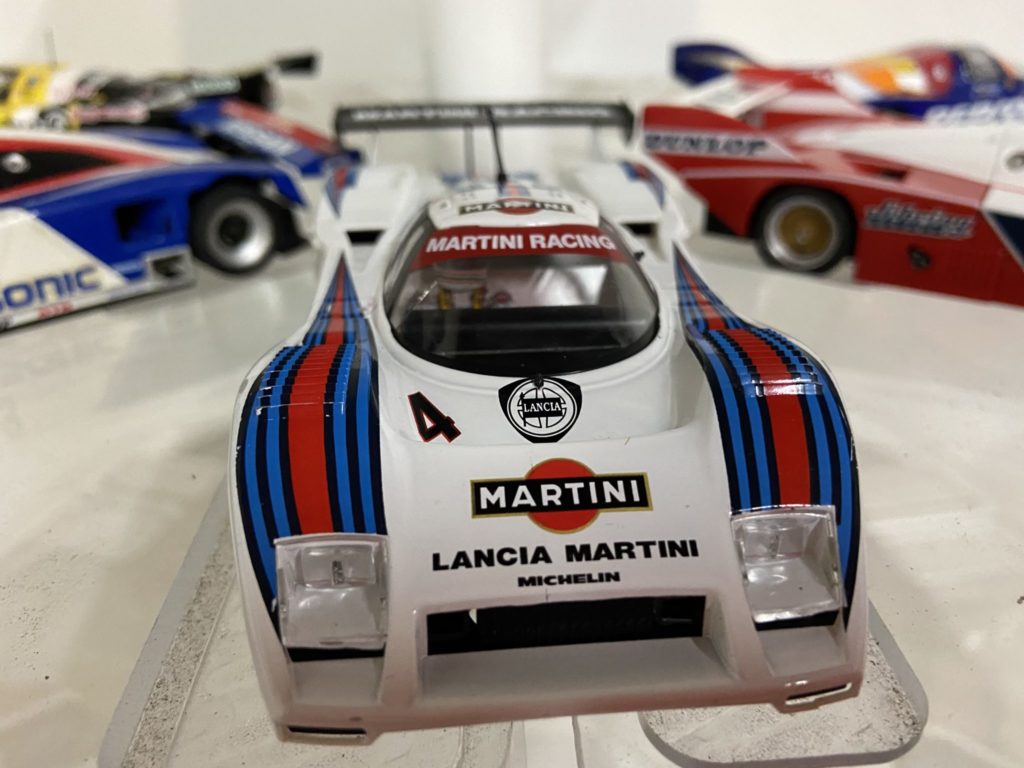 Round 11 had Brian come back into the mix. Brian managed 71 laps and a good fast lap time but his first round time was still quicker. John completed 70 laps with no improvement on his fast lap time. Melvin finished the heat with 56 laps and finished his first race series with a total of 164.4 laps. Congratulations Melvin. 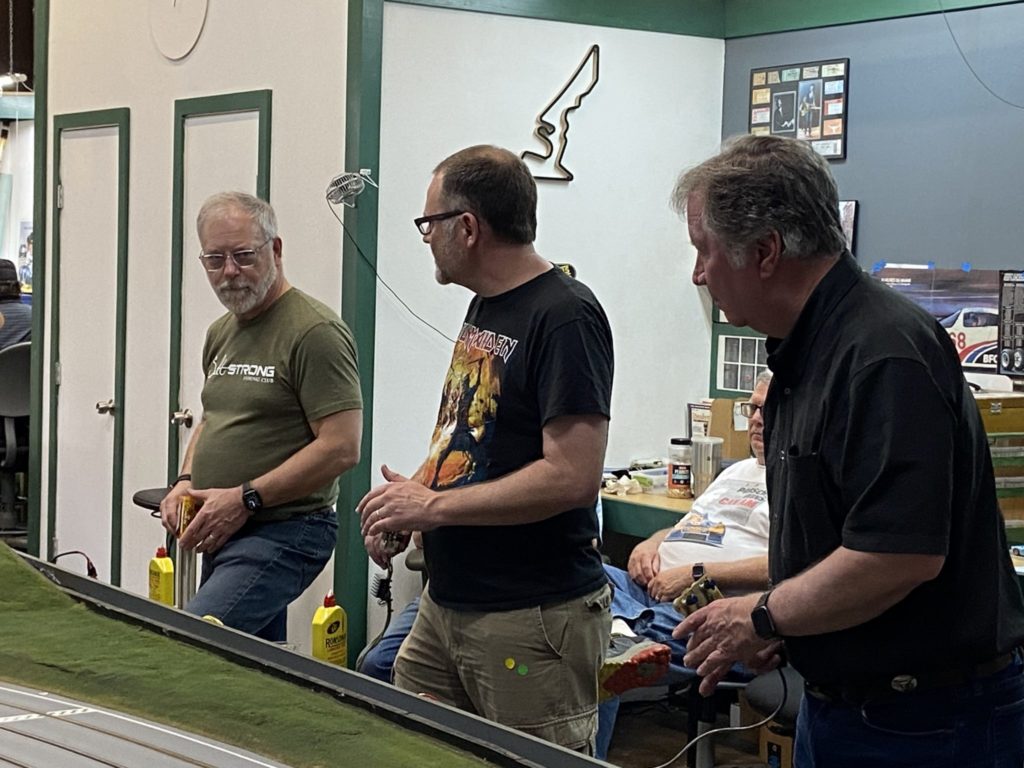 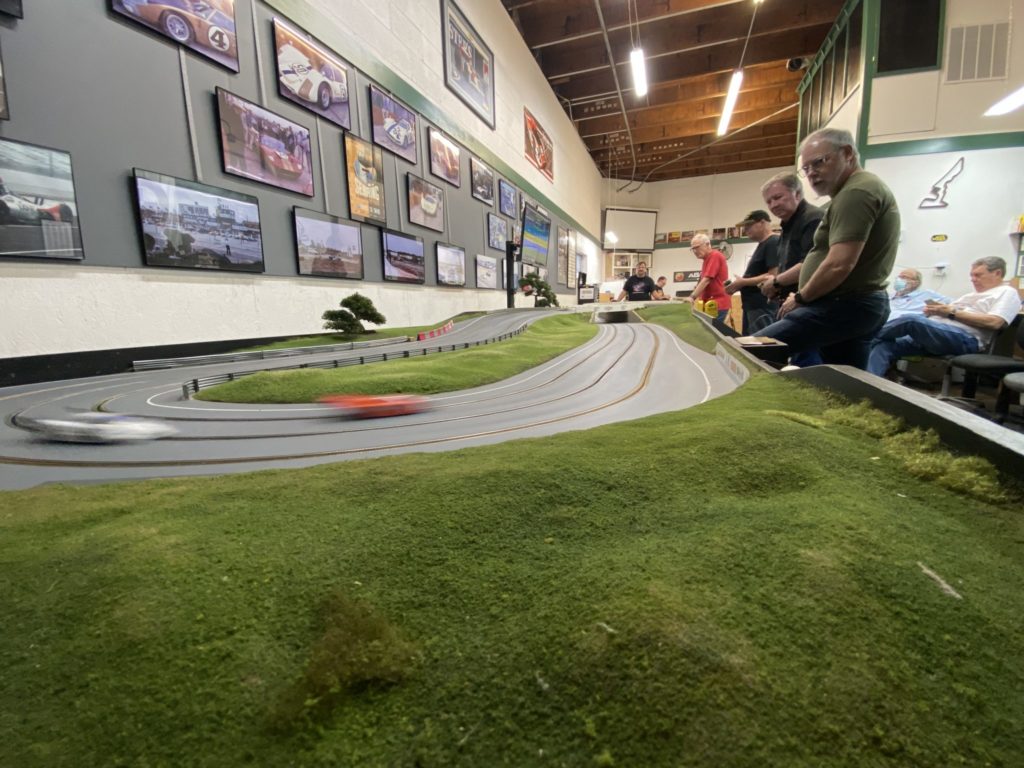 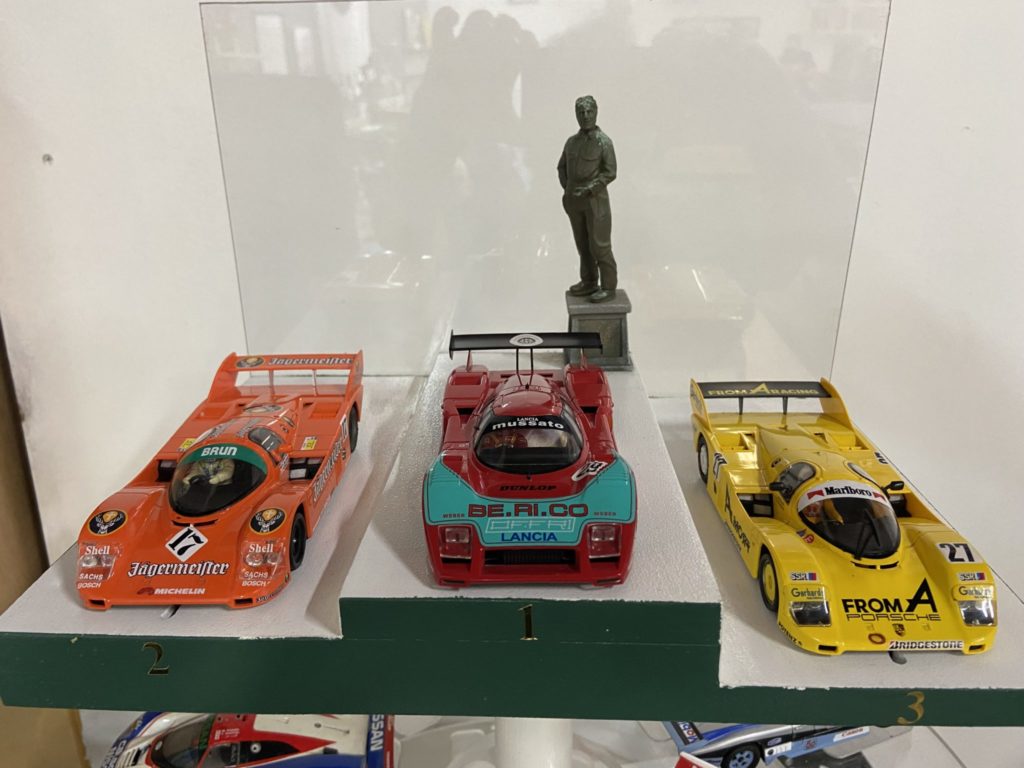 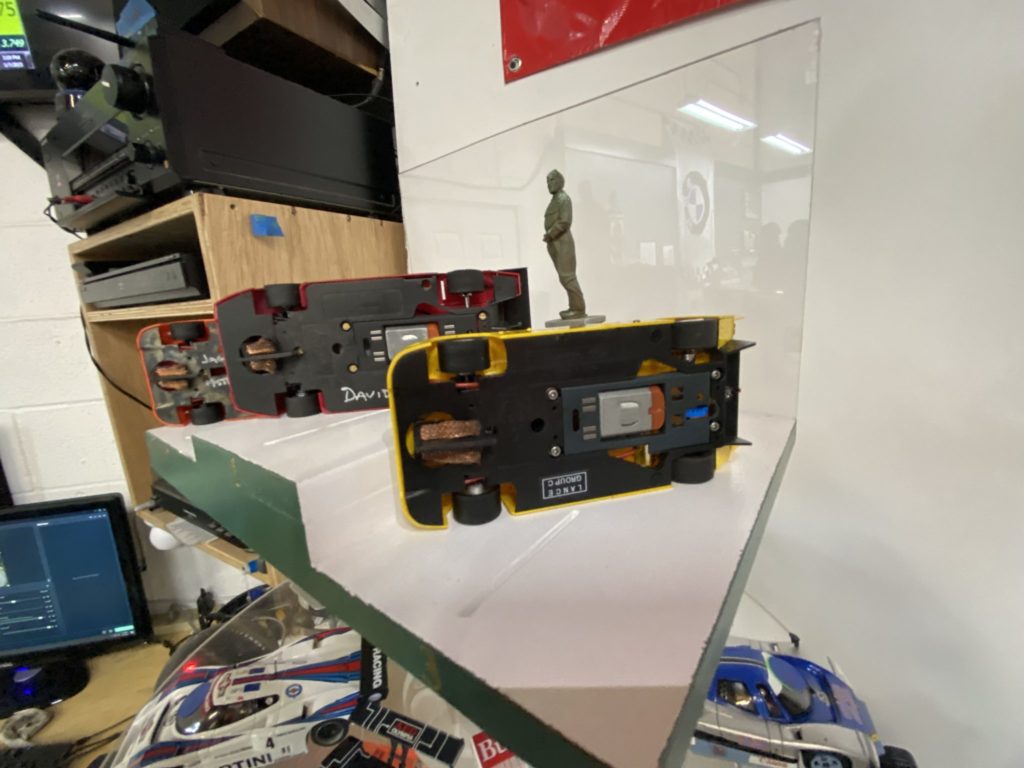 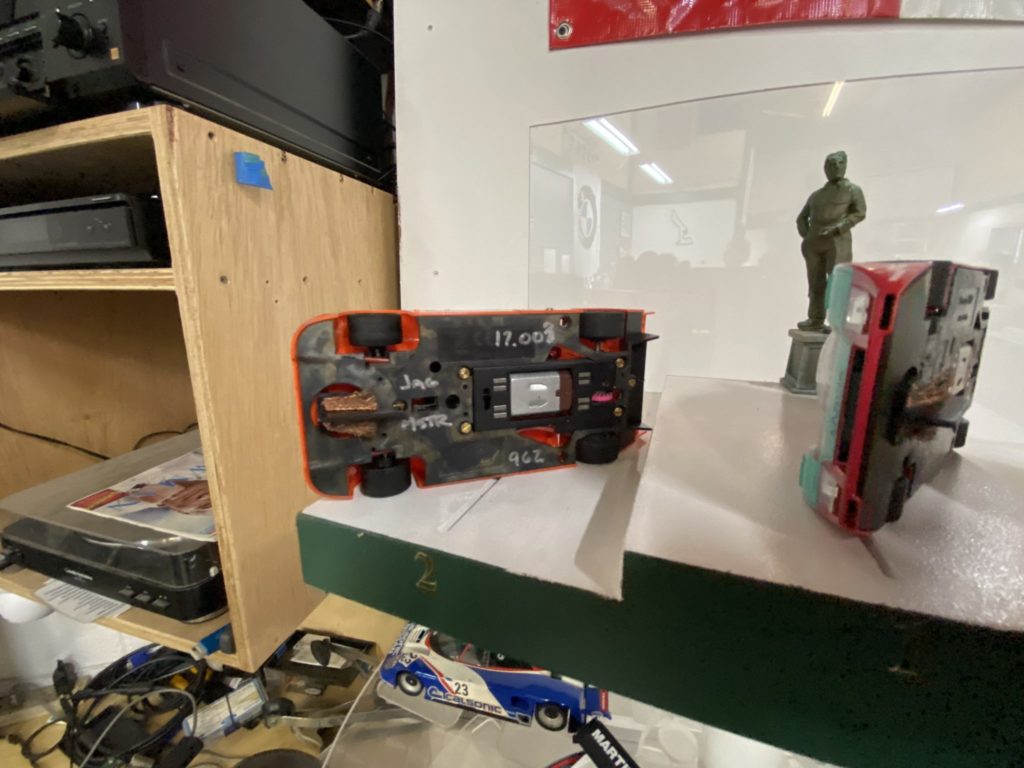 Fourth to Brian, fifth to John, sixth to Erik, seventh to Steve, eighth to Russell and ninth to Marc. 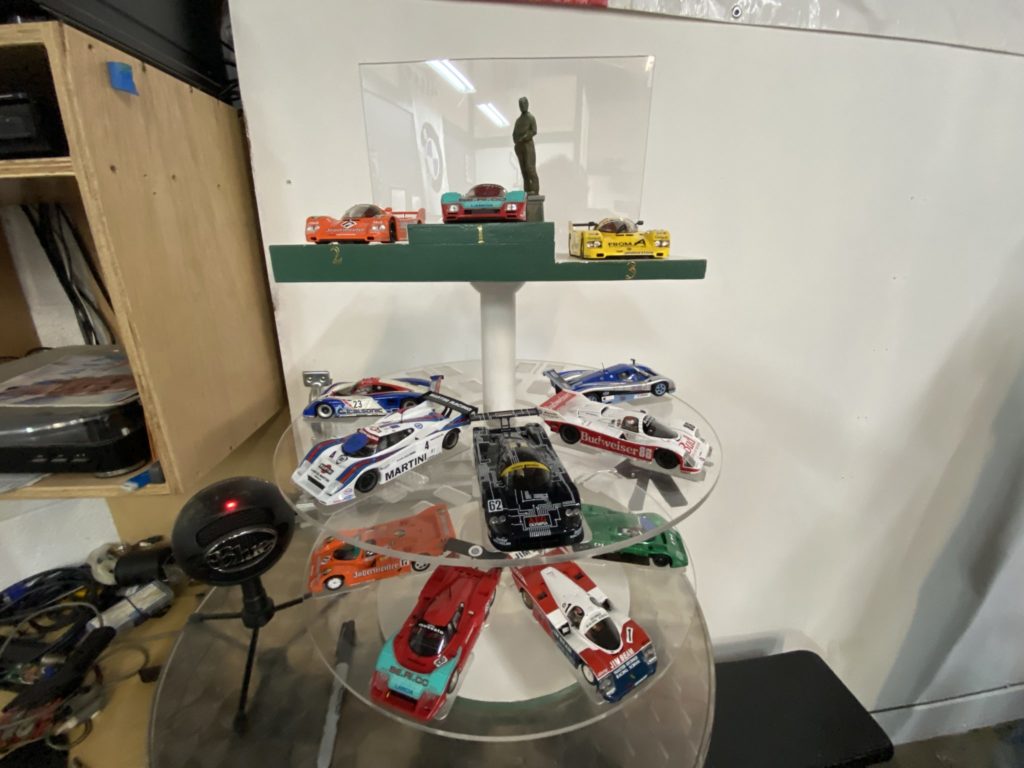 Tenth place and first place in the “B” group was Randy followed by Jay and then by Melvin. 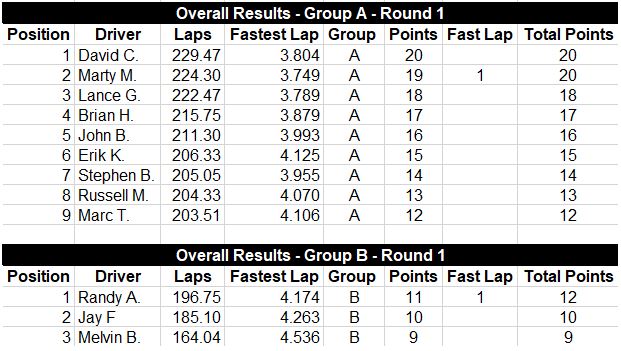 The racing was super close in the mid-field and will only be more exciting in the next round once the racers have had time to re-tune and squeeze in more practice.

The next round will be January 21st at 1:30pm central time. Check out our live YouTube feed to see the action. I can’t wait.