The sixth and final stage of the ASCC Monte Carlo revival brought out a healthy field to the track.  Some cars were refined over the course of the series, some started out fast, and stayed fast, and some stumbled. Thanks to all who participated in the series, it was very cool to see such a variety of entries.

First on the tarmac was Marty’s Datsun 240Z, turning some quick laps for such a narrow car.  Fastest lap was 7.190 seconds for the kit-bashed car. 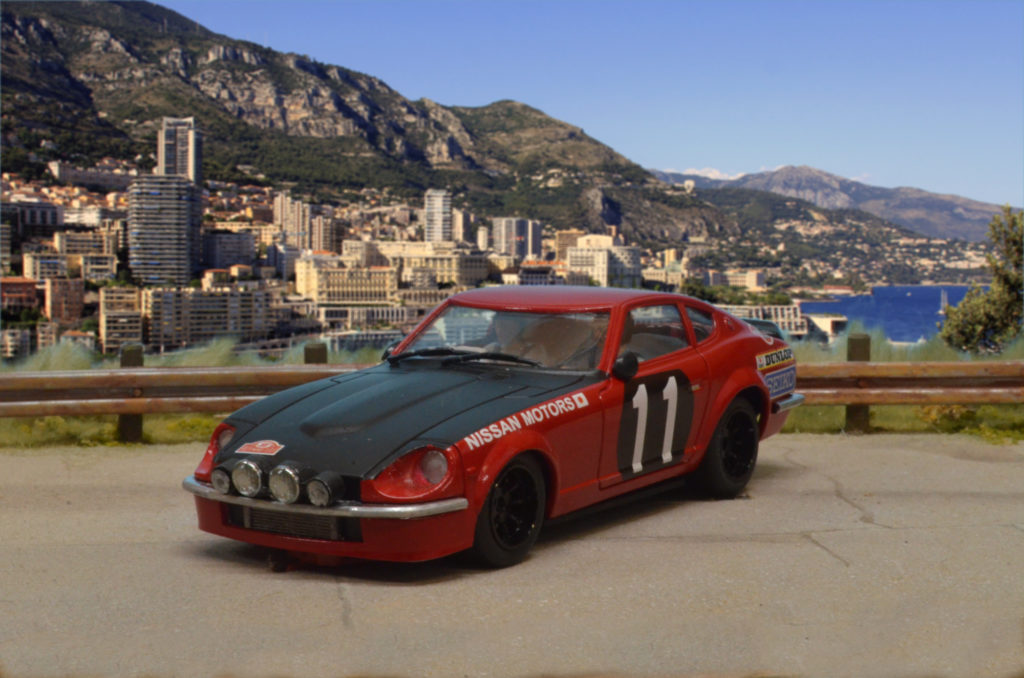 Marty up again, aka Vic Elford in the modified Fly 911.  Turning a 6.844 best lap, the Porsche finished strong. 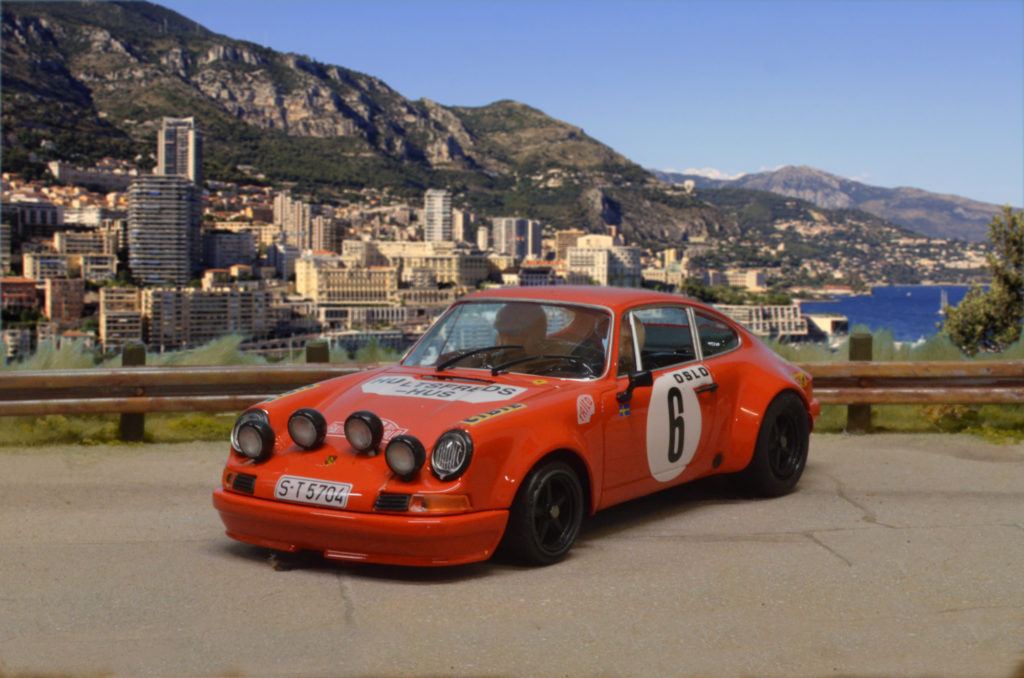 John was next on the course with another modified Fly 911.  Fast and smooth, even if the car did sound like a food processor, it turned a quick best lap of 7.146 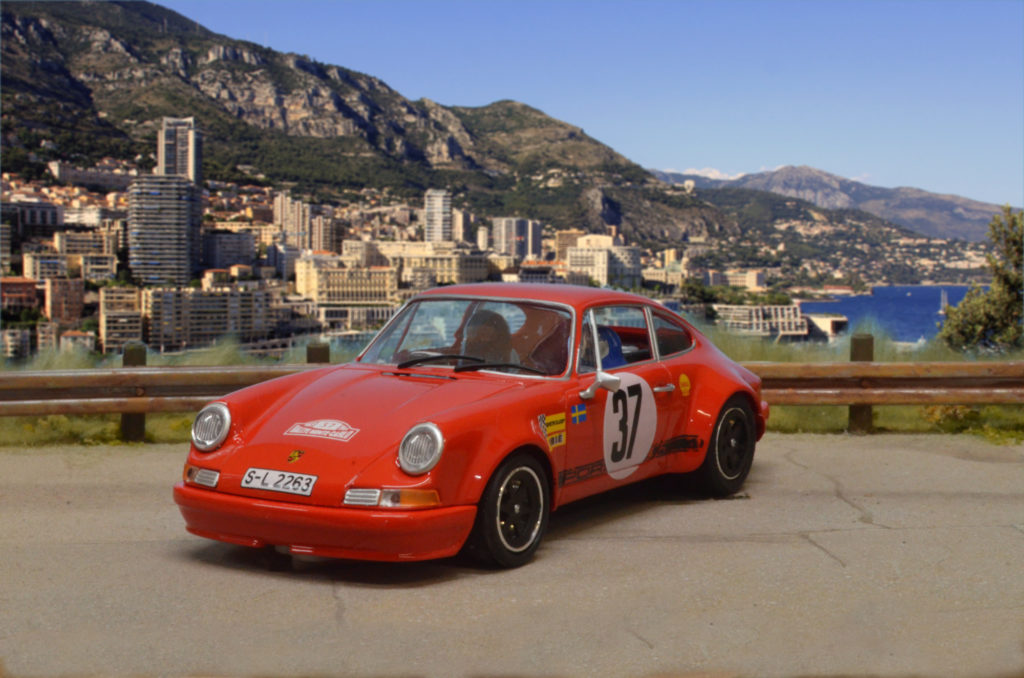 Randy took to the course again in the big Pioneer Mustang.  The Ford acquitted itself well with few deslots and a fast lap of 7.716 seconds.  One clever thing Randy did with this car was to show up at each stage with it dirtier and more beat up than the last stage. 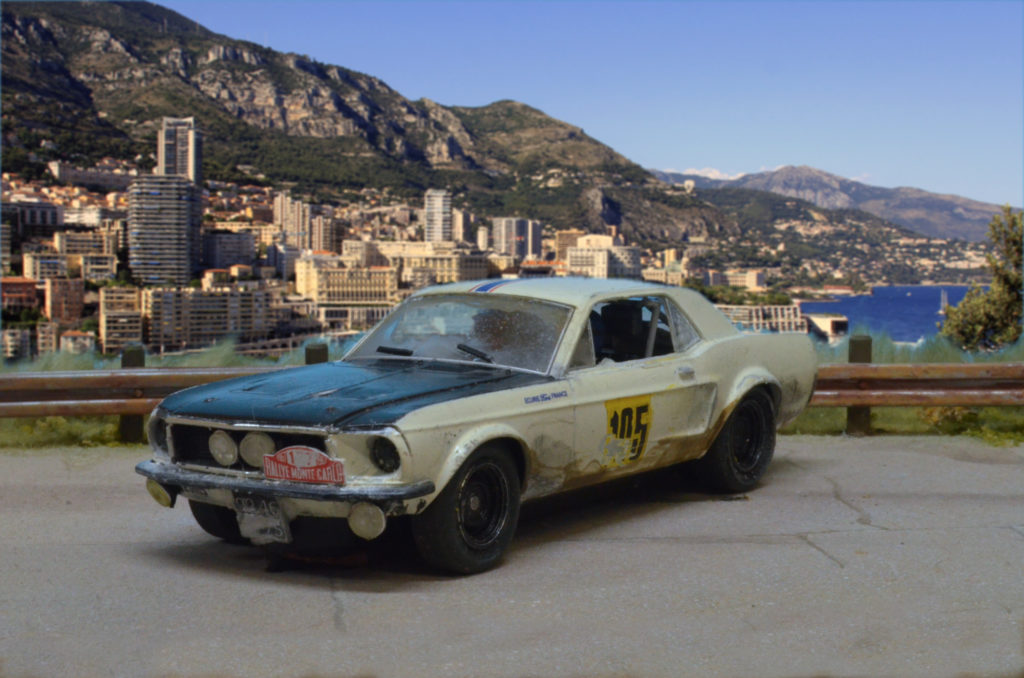 Taking the wheel for Radial T/A was Steve, tearing up the course with a box stock SRC Porsche 911, almost breaking 7 seconds with a 7.002 best lap. 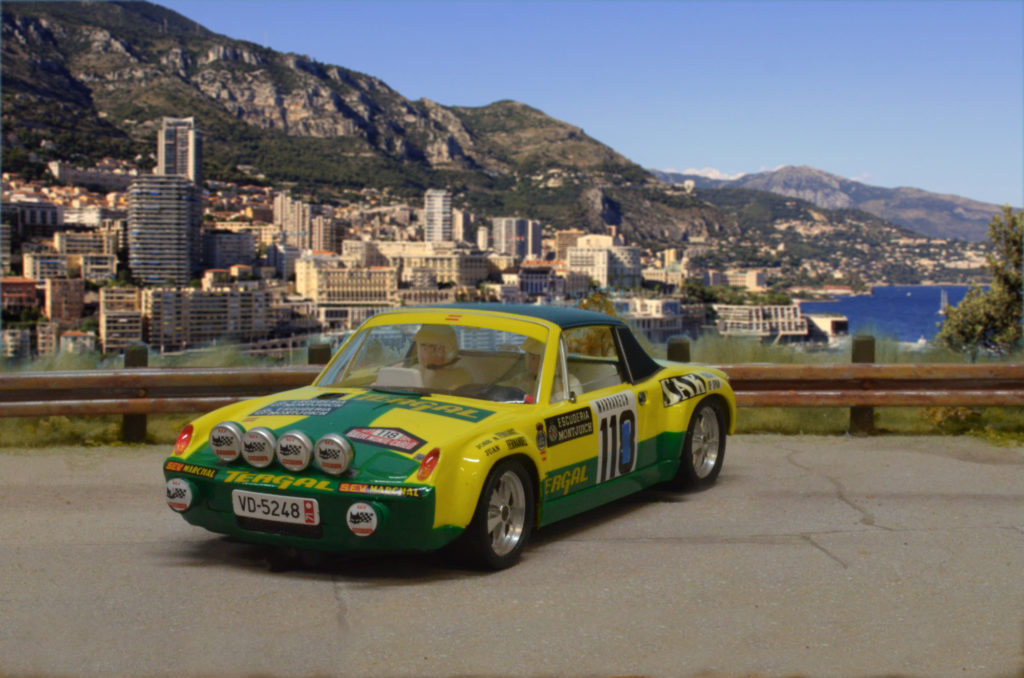 Mark returned next with his Scalextric Mk1 Ford Escort.  The Escort completed the stage with a 7.462 second best lap.

David was up next with yet another 911 with a 3D chassis and Lexan interior.  The Porsche went like a scalded cat and racked up a best lap of 6.782 seconds. 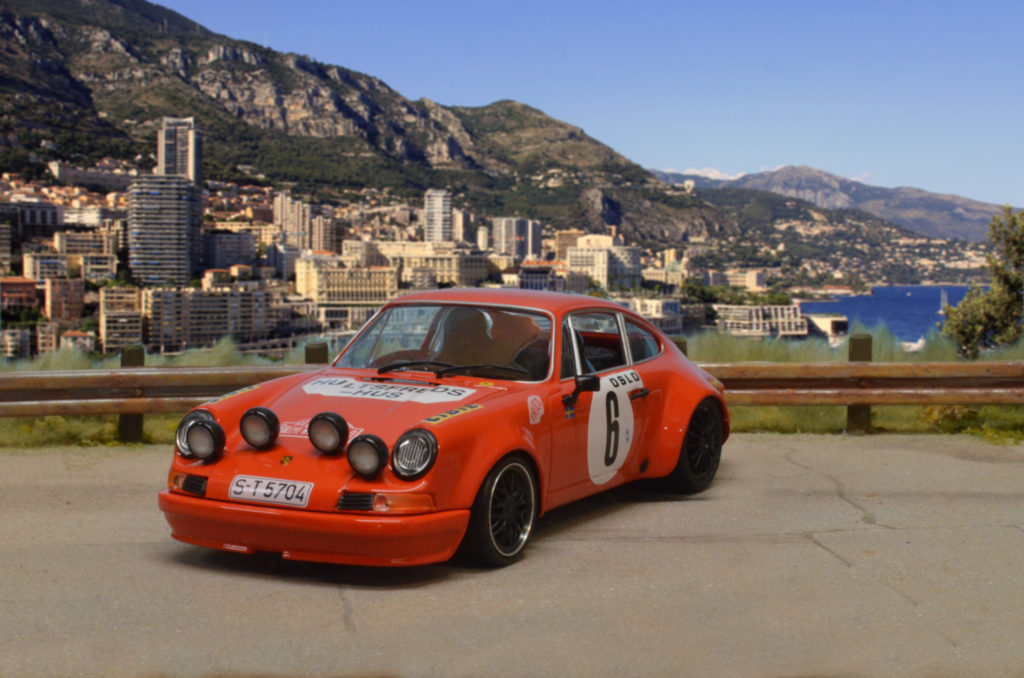 David again with his class B entry, a modified SRC Porsche 914.  Super quick, the Porsche achieved a 6.389 best lap. 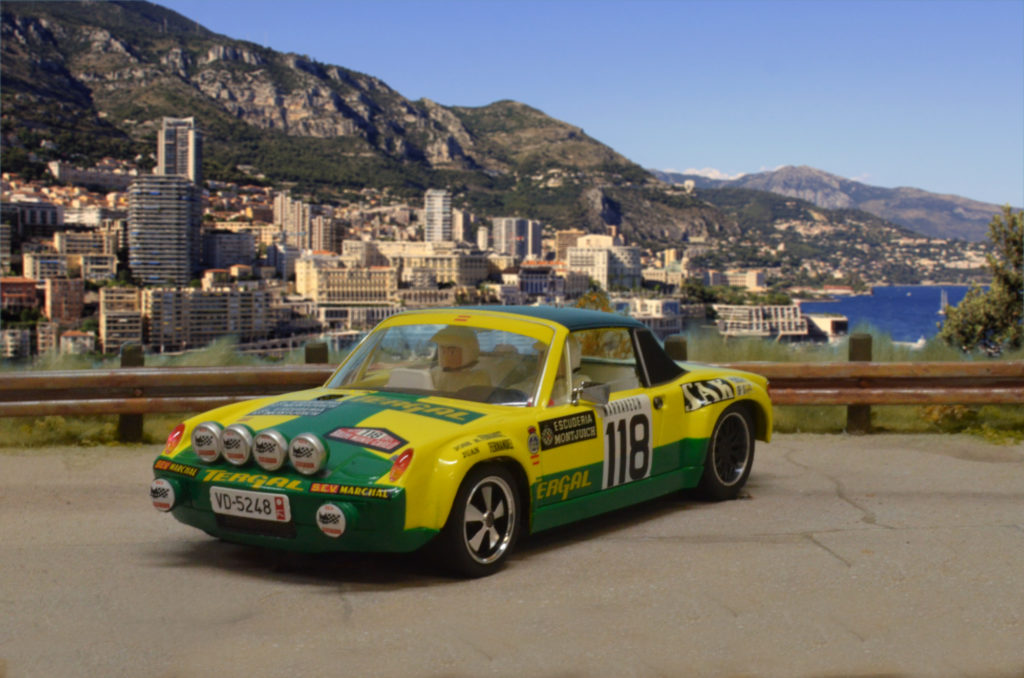 Brian returned with his SCX MGA.  Each time out the car seems a little quicker, and a little smoother, this outing being no exception, with a best lap of 7.606 seconds 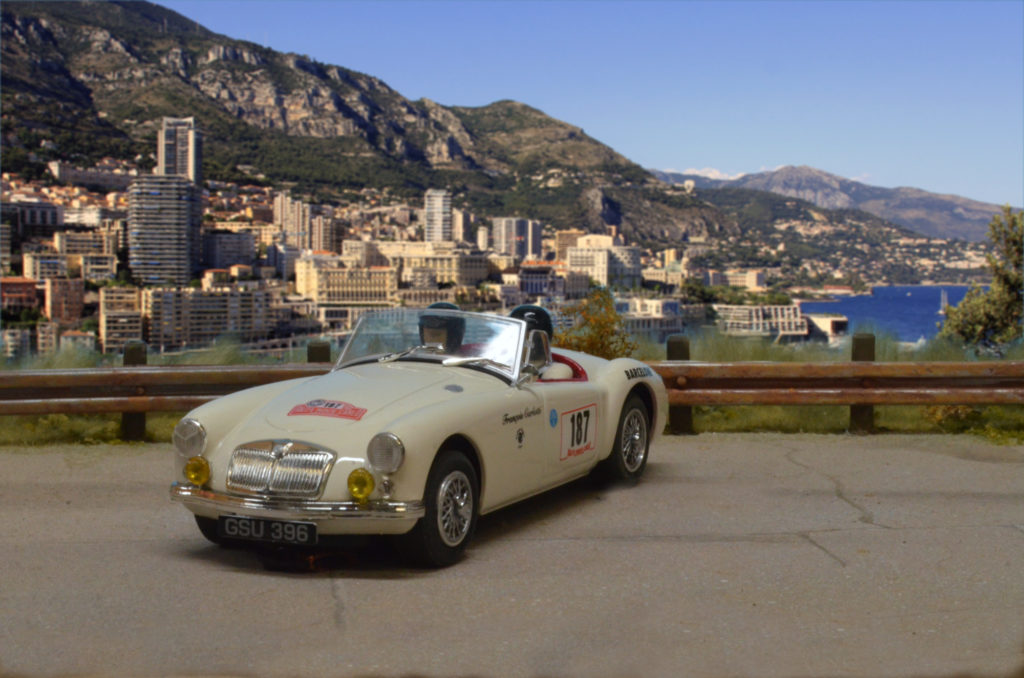 Rounding out the field was Marc with his scratch-built Chevrolet Corvair.  Car and driver were finally getting the feel of the track, with a best lap of 7.302 seconds, but too little too late. 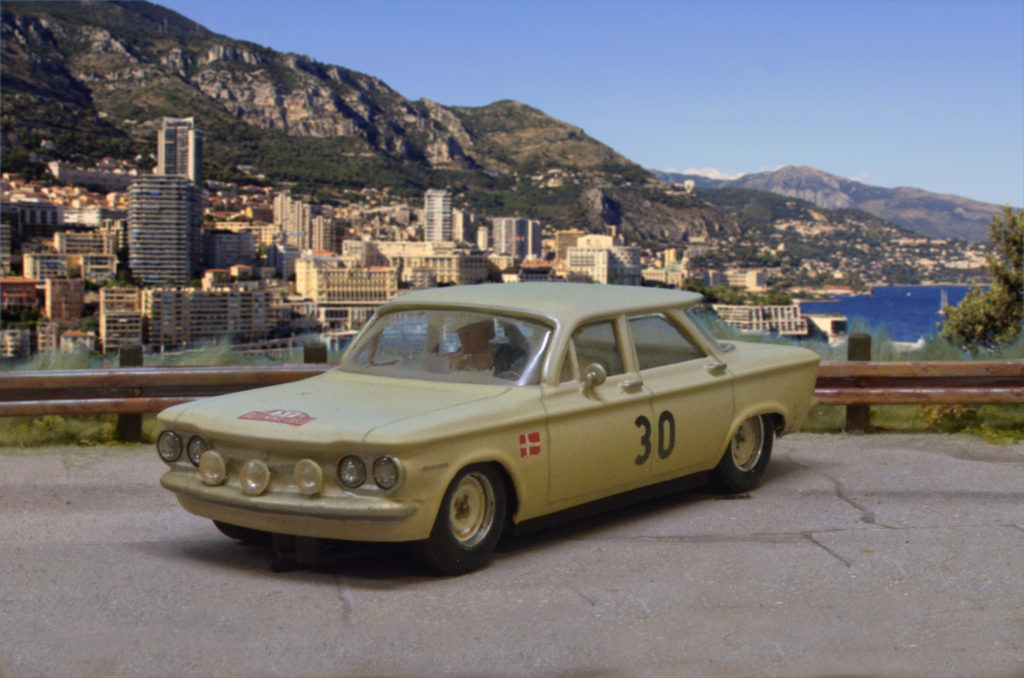 There were a record 15 cars and 11 different racers competing in the Monte Carlo series making it one of the most popular race series we have run.

Third place was John and his Fly Porsche 911 down 0.55 seconds average lap time on the second-place car.  Fourth place was the SRC Porsche 914 that was driven by Randy for two rounds and Steve for the final four rounds.

The real story is with the “B” group where David’s top placed SRC Porsche 914 was the class of the series finishing with an amazing average lap time of 6.765.  David’s average time for 200 laps of racing was quicker than the fastest lap of almost the entire field of “A” and “B” competitors, amazing.

Marty was way behind in second with his scratch-built Datsun 240Z, Randy with his custom Pioneer Mustang did an amazing job of preparation and driving to finish third.  Fourth was Marc who started the series running his custom 3D printed Saab 96 and then finished the series running his custom 3D printed Chevrolet Corvair.  Both of his cars were amazing works of art.  Fifth was Brian and his SCX MG MGA.  Brian’s car kept getting better throughout the series but ran out of rounds to move up the results.

There were seven other cars that ran the series but were classified as they failed to meet the minimum requirement of five rounds.

It was a great series and everyone is looking forward to running the next time period of the series.  Hopefully next year.